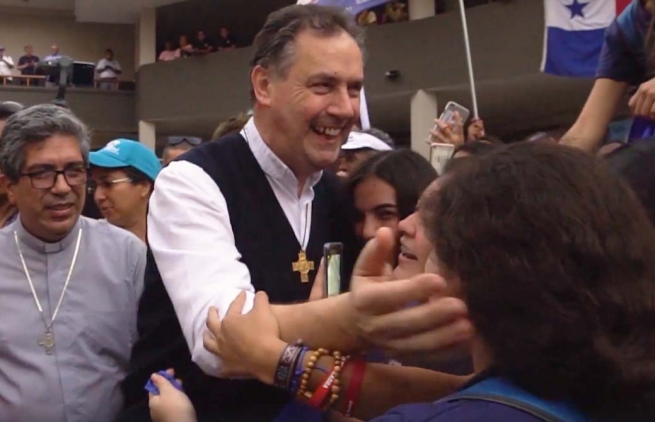 (ANS - Panama City) - Fr Ángel Fernández Artime, Rector Major of the Salesians, arrived yesterday, Monday, January 21st, at the Basilica of Don Bosco in Panama to accompany the youth who will participate in the World Youth Day (WYD) and the world festival of the Salesian Youth Movement (SYM).

As early as two o'clock in the afternoon the Salesian delegations were present in the courtyard of the Basilica of Don Bosco to receive the Rector Major. During the wait there reigned an oratorian party atmosphere, with the young people busy singing, dancing, joking, telling each other their  experiences, spontaneously making new friends.

Then, at 6:15 pm, amid applauses, ovations and songs, Fr Á.F. Artime made his way through the young people crowded together to take a selfie with him or to give a welcome hug to the Successor of Don Bosco. In a natural and spontaneous fashion, some space gave way, bounded by the flags of different countries, for the encounter. At the end of the route one could glimpse the exact replica of the "Becchi" house - Don Bosco's birthplace - built at the Salesian center, the "Valdocco of America".

Fr Rómulo Gallegos, SDB, Director of the House, welcomed the Rector Major and thanked him for his visit. The Superior of the Salesian Congregation greeted all those present, spoke of his long journey and expressed his joy and happiness in finding himself among the young.

"We want to make a journey of fidelity to the Lord. I am the first who wants to continue to learn to be truly faithful to Jesus, and to do it with you, my dear young people, is a wonderful gift. We shall have time to share and to greet each other before meeting the Pope and the young people of the world," said Fr Á.F. Artime before an audience of boys and girls from all over the world who listened to him with attention and admiration.

Tomorrow, January 23rd, the Rector Major, together with the Mother General of the Daughters of Mary Help of Christians, Mother Yvonne Reungoat, will give a message to all the young people of the Salesian community present at WYD, as part of the worldwide celebration of the SYM.

After the WYD, the Rector Major will remain in Panama to celebrate Don Bosco's triduum and the great feast of 31 January together with the Panamanian community, which in Don Bosco celebrates its patron saint.