Panama – “Young people must be looked at with the eyes of God”: The Holy Father spoke about Don Bosco in Panama 2019. 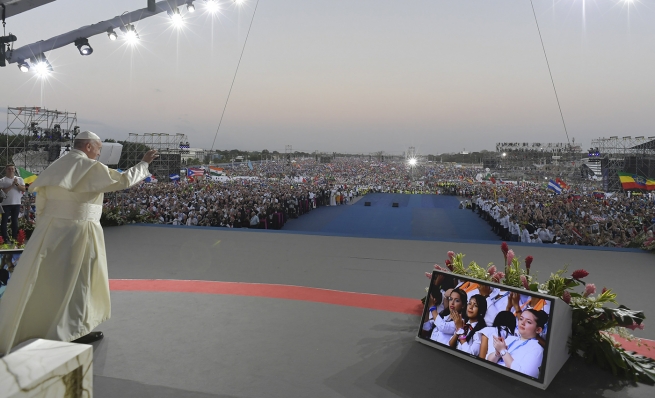 (ANS - Panama City) - Before thousands of young people, the Holy Father spoke on topics of great relevance for today’s youth and with a simple language, deep and close to young people’s understanding. He told them that “the life that Jesus gives us is a ‘love story’, a story of life that wants to mix with ours and take root in the good soil of each one of us”, as it has been the case with our saints.

Referring to the Saint of the young people, he presented him as a saint who took a step for in favour of abandoned young people: “He did it; Don Bosco was courageous, and he dared to take that first step: to embrace life just as it comes and, from there, he was not afraid to take the second step: to create with them a community, a family, where, with work and study, they felt loved. To give them roots from which to hold themselves up, so that they can reach heaven, so that they can be someone in society; to give them roots so that they can stand steady and not be thrown down by the next wind. That is what Don Bosco did, that’s what the saints do, that’s what is done by communities that know how to look at young people with the eyes of God. "