Brazil - The Salesians receive an award from the Military Tribunal 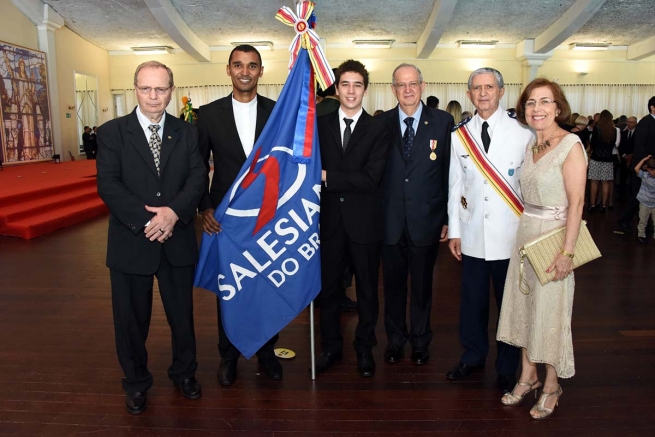 (ANS - Brasilia) - The history of the city of Brasilia is closely linked to Don Bosco and the Salesians. According to tradition, on 30 August 1883 Don Bosco had a missionary dream in which he foresaw the evangelizing action of his spiritual children. Among the places where they would work, he saw Brasilia. There is no doubt that the Salesians were soon able to start an impressive service to the poor and young people most in need in Brasilia as requested by Don Bosco. And on the occasion of the 82nd anniversary of the canonization of Don Bosco, the Salesians received from Brazilian Society recognition for their services.

On Friday 1 April, on the occasion of the 208th anniversary of the Supreme Military Tribunal (STM), the Salesians received one of its greatest honours. And it is noteworthy that the award was conferred by a Salesian past pupil: the President of the STM, Air Force Lieutenant Brigadier Gen. William de Oliveira Barros. The event was held at the Army Club and saw the participation of personalities and institutions of the country, as well as the young people of the Salesian Institute "Colégio Dom Bosco."

In opening the event, the Salesian past pupil and parishioner thanked the Salesians for their presence in Brasilia. He recalled the history of the Colégio Dom Bosco Brasilia which dates back to 1960.  In particular he spoke about its inauguration "which was attended by the President, Dr Juscelino Kubitschek; the Mayor, Dr Israel Pinheiro; Archbishop José Newton, and the Fifth Successor of Don Bosco, Fr Renato Ziggiotti ".

The award was presented to Fr Anselmo Nascimento, Rector of the Community, and the student Moysés Savio. Today, Colégio Dom Bosco Brasilia is one of the 110 institutions included in the Salesian Schools Network.

Awards like this are an incentive to continue to work according to the dream of Don Bosco, forming good Christians to become good citizens, like, for example, the Salesian Past Pupil who is the President of the STM.