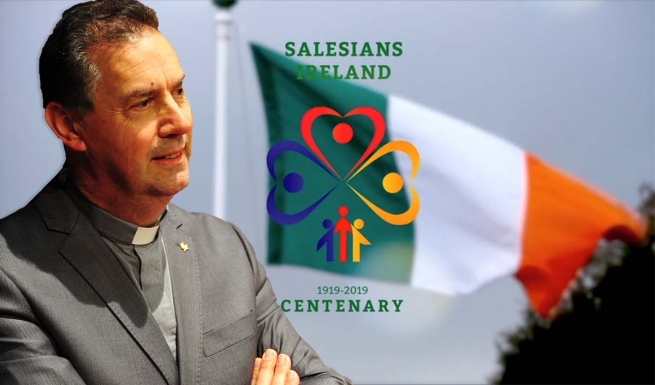 (ANS - Rome) - After a January truly full of events – what with the Days of Spirituality of the Salesian Family in Turin-Valdocco, the World Youth Day and the Feast of Don Bosco celebrated in Panama - the Rector Major, Fr Ángel Fernández Artime, has scheduled several animated visits for February in the Central and Northern Europe region. The first stage will be the "Saint Patrick" Province of Ireland, which this year is committed to celebrating its 100 years since the arrival of the first Salesian missionaries on the island.

The X Successor of Don Bosco, accompanied by his Secretary, Fr Horacio López, will begin his visit on the morning of Wednesday 13 and will first go to the Mother House of the Salesians of Ireland, in Pallaskenry. There, at separate times, he shall animate the members of the Institute's Parental Council and Student Council, as well as the educational community and all the pupils of the various school cycles. In the afternoon, instead, moving to Milford, he will meet with the Provincial Council.

The morning of Thursday 14 February will see the Rector Major engaged in learning about the school community of Milford, where he will also preside at the Eucharist. Scheduled for the afternoon, at Maynooth, Fr Á.F Artime meets with all the Salesians of the Province and with the young people of the Irish Salesian Youth Movement.

On the last day of his visit, Friday 15, the Rector Major will first visit the renowned school of Celbridge; then, in the capital, Dublin, he will have the opportunity to learn about the work of "Don Bosco Care", a Salesian institution that takes care of young people at risk of social exclusion and that has become a point of reference for many of this sector.

The last act of his visit will be the meeting with the local Salesian Family, on Friday afternoon.