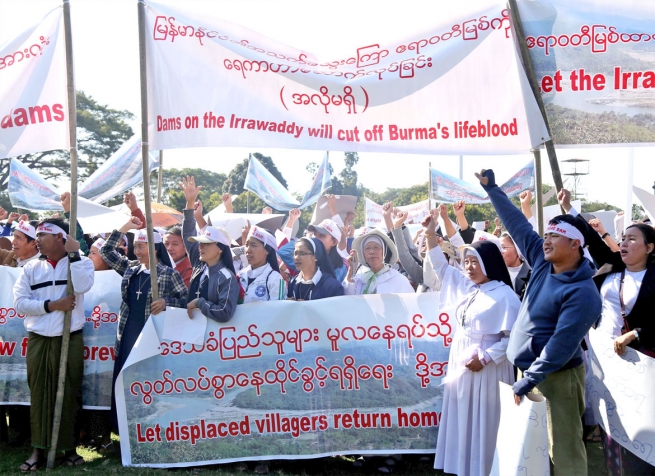 (ANS - Myitkyina) - "Inequity affects not only individuals, but entire countries," writes Pope Francis in his encyclical Laudato Sì (No. 51). In the same passage the Holy Father warns against those companies who for their immediate commercial interests leave behind enormous human and environmental damage in their wake: "villages without life, depletion of natural reserves, deforestation, impoverishment of agriculture and local breeding, craters, devastated hills ... ". In tune with the words of Pope Francis, and in defense of his flock of faithful, Salesian Cardinal Charles Maung Bo is fighting against the resumption of work on the Myitsone Dam.

The Myitsone Dam is an imposing Chinese construction project, to be built at the confluence of the Mali and N'Mai rivers, which come together and form the Irrawaddy. It would be the first dam to block the Irrawaddy River, which represents the cradle of the Myanmar civilization, and would be exploited for 90% of its capacity by China alone.

Work on the dam's construction - capable of generating 6,400 megawatts, and worth USD 3.6 billion - was discontinued in 2011, following popular protests, which denounced fears about the project's environmental impact and serious consequences and hardship to the local population - to a large extent Christian.

In recent times, however, there have been ever stronger signs of a possible resumption of work and for this reason many voices, including from the Christian minority, have risen to defend those who risk the most because of this project. Among the many voices is the first cardinal in the country's history, namely Cardinal Bo:

"The Myitsone Dam is a death sentence for the population of Myanmar," he stated bluntly. "The gloomy prospect of millions of farmers losing their livelihood, the violation of sacred sites along the rivers, the death and destruction of the precious flora and fauna of our beloved nation, is becoming a nightmarish reality ...

On behalf of all the people of Myanmar, especially the poor farmers, we sincerely ask all interested parties to stop their attempts to abuse our mother Irrawaddy. We warmly invite the people of Myanmar to collaborate to protect the dignity of our mother Irrawaddy. We are confident that our leaders will resist all efforts to destroy the destiny and dignity of our nation."