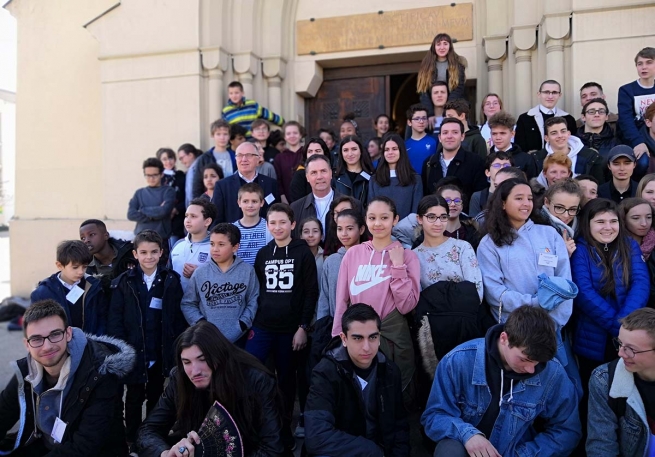 (ANS - Lyon) - Yesterday morning, February 21, after meeting the delegates of the "Tutelle" educational project and then the directors and board members of the Salesian schools network, Fr Ángel Fernández Artime, Rector Major, continued his visit to the France-South Belgium Province (FRB) in the afternoon to dialogue with pupils and formation personnel of Salesian schools.

The meeting was held at the large "Notre Dame des Minimes" school; to accompany the 10th Successor of Don Bosco were Fr Tadeusz Rozmus, Councilor for the Central and Northern Europe Region, Fr Horacio López, Secretary of the Rector Major, and the Provincial FRB, Fr Daniel Federspiel.

On this occasion, the youths, belonging to the Défi Citoyennete project, explained to the Rector Major their commitment to active citizenship and to the promotion of Salesian values among the youngest, which takes the form of a series of activities within the school.

Later Fr Á.F. Artime met the formation team of the Salesian schools network, listening to their testimonies on the shared commitment of Salesians and lay people and offering their contribution on this topic.

The long day of activity finally concluded with the Eucharist the Rector Major presided at in the Salesian parish in Lyon before a number of members of the Salesian Family.

Today, Friday 22 February, the Rector Major leaves Lyon to reach Paris, where he meets the leaders of the Salesian network of "Don Bosco Action Social", the Provincial Council, before concluding the day in a symbolic center of the Salesians in France, the Salesian center of Argenteuil where, in 1995, the association "Le Valdocco" was born, which has since also spread to other houses, which operate in education for peace and citizenship.

The "Saint Francis de Sales" Province of France and South Belgium (FRB) has 19 standing presences, animated by 166 Salesians. There are currently four novices.