Togo - Murder of Fr Antonio César Fernandez, SDB: this is what really happened 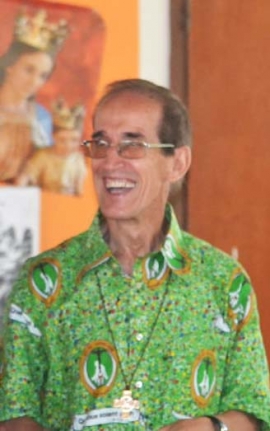 (ANS - Lomé) - One of the Salesians who was traveling with the late Fr Antonio César Fernandez told us in detail all the painful events of that Friday, February 15, 2019. Below, his testimony:

It is not easy to narrate such an event after having lived it so closely. However, for the memory of Father César, for the mission that has entrusted us and in which it encourages us, I want to try and speak. We left from here (Lomé, ed.) Friday, February 15, in the direction of Ouaga (abbreviation of Ouagadougou, capital of Burkina Faso, ed.). In Cinkassé (Togo city on the border with Burkina Faso, ed.), we left the confreres who work in this city. With a certain serenity, we continued along the road. After the border formalities, we began the journey in Burkinabé territory.

After 30 minutes of travel we arrived at a border checkpoint. From there, we could see trucks from afar that were along the way. And while we were wondering what was happening, we saw a man who asked us to park the car and then asked us to get out of the vehicle, which we did. We were not physically assaulted. We were subjected to an interrogation. They asked us to identify ourselves: "What are you doing? Where are you going?" We said that we were priests, that we had just finished a meeting and were returning to Ouaga.

Then one of them asked the priest who was driving to search the vehicle, which he did with him, while the others started to break the windows of the three parked vehicles, probably the customs officers' vehicles. After smashing them, they took gasoline from a nearby fuel vendor and set these vehicles on fire. As they did so, Fr César asked why they were burning them. The one in front of him, naturally well-armed, did not give an answer. He whispered some answers, but we did not catch his words.

Later, they asked me and Fr César to move on through the bush. From the checkpoint to the bush it is about 500 meters. Once there, we saw other individuals of that group. In that bush, we were not subjected to a violent interrogation. Suddenly, we saw that they were loading on their motorbikes all they had taken from the attacked station. We also saw the confrere who was driving being ordered to move the vehicle forward. In the vehicle they had loaded our computers and the money we had with us, as well as phones, external disks, USB sticks; in short, everything they could take. Then he pulled the vehicle out of the tarry ground and headed towards us. He could not go any further with the car, because there was a ditch on the road.

He then got out of the car and came to us on foot. The one (one of the terrorists, ed.) who was following our brother left him and approached me and Father César. The others had already left, only two of them remained. One of them told me: "You, turn around and go!" As soon as I turned around, I heard the shot. I turned my head back and saw Father César already on the ground. I thought it was my turn. I raised my hands at the level of the nape; I still heard other shots, but they were not for me and I understood that they were still for Father César.

I would have wanted to go back to the body, but something told me to move on. I advanced up to reach the confrere who was driving and he asked me: "Where is Father César?" I replied: "They shot him." So I told him we would take the body back, and he told me to wait a bit for the terrorists to go away. After they left, we approached the body of Father César. I closed my eyes. I made a sign of the Cross on his forehead and we took him. He was soaked with blood. Then we returned to the border.

Here's what happened that day.