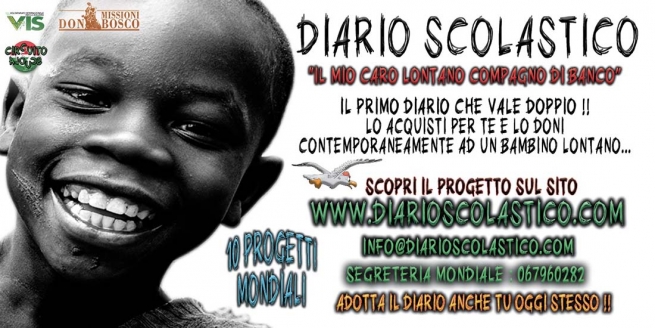 (ANS - Ciampino) - The school diary is not a simple technical instrument for taking notes: it is the faithful companion of every student throughout a journey of 10 months and often becomes the confidante of secret thoughts. For the school year 2016-2017 various Salesian groups have come together to produce a "missionary" diary, which aims to inspire in pupils a concern for their peers in the southern hemisphere.

The diary "My dear distant classmate" comes from an idea of ​​a Salesian priest in central Italy, and David Febbraro, a Salesian Cooperator who is Director of the Oratory in Ciampino. To support the project two great missionary bodies have joined forces - the Don Bosco Missions Association of Turin and the NGO VIS (International Volunteer Service for Development).

What is special about this diary is that it is worth double, because every student who buys it automatically gives an identical copy to a classmate who lives in the mission areas, in his own language of course. The diary is produced in 5 languages: Italian, Spanish, Portuguese, French and English.

Each month VIS presents a school from different parts of the world: Angola, Albania, Bolivia, Cameroon, Liberia, Madagascar, Palestine, D.R. Congo etc. with which the Italian classes can link up.

The diary is also interreligious. Every day it will include three calendars - Christian, Jewish and Islamic, with the various festivities. Sundays and Catholic holidays are given special attention in a table drawn up by the designer Cesar, which can be coloured by those who wish to do so.

The leitmotif of the diary is a story - in nine stages, one per month - by Jonathan Junior, son of the famous Jonathan Livingstone Seagull.  Each story is intended to help the preteens in growing to maturity, and encourage them to be courageous in making conscious choices.

This diary may also be used outside the school, as an aid for children and pre-adolescents of the oratories, in parishes, in catechism classes and in groups. There is also an accompanying book for teachers and educators.

To learn more about the diary, visit: www.diarioscolastico.com