Peru – Fr Diego Clavijo: "It is necessary to reach the essence of the indigenous soul and revitalize the life of the people with the values of the Gospel" 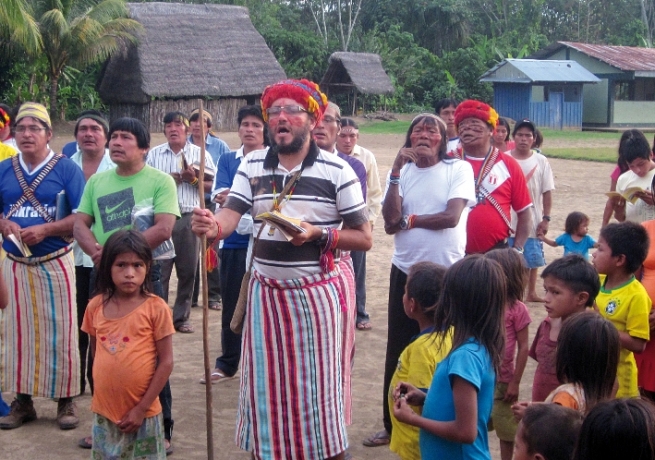 (ANS - Yurimaguas) - The search for new ways for the Church - one of the objectives of the Synod for the Pan-Amazon region - must lead to entering and immersing oneself into the experiences of the Church in the region. Fr Luis (Luigi) Bolla tried to build a ministerial Church, an incarnation of the Gospel among the Achuar natives of Peru and Ecuador. After his death, another spiritual Son of Don Bosco, Fr Diego Clavijo, is giving continuity to that work. Born in Ecuador, the Salesian has been a missionary in Peru for 18 years and is among those who started the Salesian presence in the Peruvian Amazon, in 2001, together with Fr Bolla.

How does the ministerial Church fulfill itself among the Achuar, what are the difficulties and what progress has been made in these years of work?

I think the fundamental thing is that the message of the Gospel is transmitted in their language, with its forms and its expressions. It is a work started by Father Bolla, who was the missionary who made the process of presence within the group more systematic and constant; he indeed managed to get that message to enter and be sown in the hearts of families, young people and achuar children.

To what extent is it important for the achuar people that the missionary from outside speak their language and try to relate to them in their language?

For them, Spanish is really something far away, out of reach. Their mother tongue is the one they usually use; one percent are the teachers who speak a little Spanish and nothing more. The missionaries who came from Europe to our American lands had to learn Spanish to announce the Gospel. For the Achuar, it is fundamental that we preach in their language, now that they have the New Testament translated, and they say: "Now, yes we understand, now we understand the message more deeply, now we can share, we can go much deeper into that same message."

In view of the Synod on the Pan-Amazon region, how could this experience of the achuar world illuminate new paths between other Amazonian peoples?

I believe it is important that, as a Church, we do not try to enlarge too much, but simply to take a people and engage profoundly with that people. This commitment is leading to the fact that the missionary and the indigenous Church, which in this case has arisen, can really reach the essence of the indigenous soul and revitalize the life of this people with the values of the Gospel. If we succeed in obtaining a reorganization among other indigenous peoples, reorganization of territories and peoples, which are not divided into parishes, ecclesial or political jurisdictions, but which include all the people, then I believe this experience would be of great help.