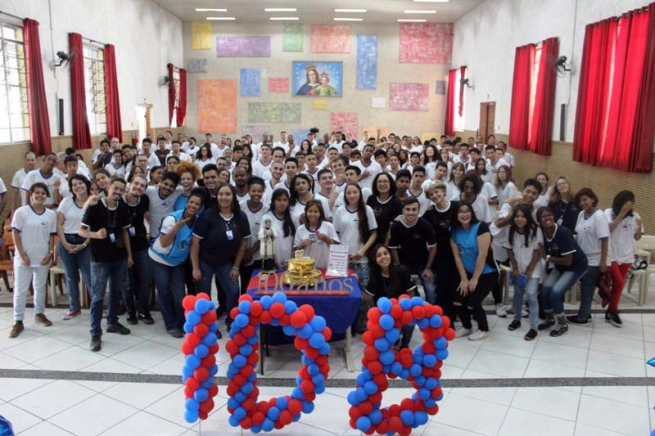 (ANS -São Paulo) - With a number of events and activities, the first centenary of the "Instituto Dom Bosco" (IDB) in São Paulo, Brazil, was celebrated in the past few days, its symbol a leafy and imposing tree called "jequitibá". March 19 was an important date, as it commemorates the day of its foundation, during which it was recalled that the "giant IDB tree" is still alive and present in the lives of thousands of young people, in a "significant and very special way". But the institute celebrated the feast throughout the month of March, including performances of art, music and theater.

On March 15, the students and educators of the Center for Social and Productive Development (CEDESP) of the Bom Retiro and Vila Paulistana units and the "Better Life" Program of the Center for Children and Adolescents (CCA PROVIM), together with volunteers, Past Pupils, youth and Sons of Mary Help of Christians attended the celebration of the Mass presided by the Director, Fr Hélio Espínula.

The celebrations continued with games for all the school's children and youth and ended with the sharing of a fraternal agape. "It was an honor to receive the invitation to commemorate the opening of the centenary of the Institute. I had the wonderful experience of attending this house for a year and participating in the work, both as an educator and as a volunteer. Now that I have returned I have been welcomed with great affection, and this shows how God blesses the work of Don Bosco, who has sown the seed of love, which has flourished and given so many fruits in a century," said the young Samara Sousa.

On March 19, IDB students were greeted with a photographic exhibition that told the story of the institute. On Saturday 30th the centenary celebration was held with the students' families. More than 500 families participated in the activities, attending the artistic activities of their children. These, for their part, presented a beautiful choreography with the costumes of various characters, which represent the work of a hundred years of Salesian presence. “100 years of IDB, 100 years of IDB. Don Bosco who dreamed, it was God who blessed him and you inherited it”, was the refrain of a beautiful song.

Finally, on 27 March, a commemorative dinner was held in the presence of friends and benefactors of the institute, with representatives of companies collaborating with the IDB and various public authorities. On this occasion, Fr Espínula thanked those present and wished the institution a long life. Fr Justo Ernesto Piccinini, Provincial of São Paulo, also took part in the activities, recalling "the greatness and importance that the Dom Bosco Institute has in the lives of many children, young people and adults."