Brazil – Rector Major in Campo Grande: "My heart is truly happy to be among you" 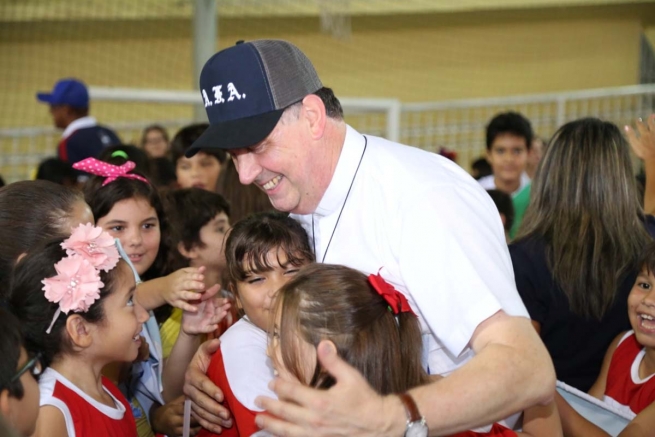 (ANS - Campo Grande) - Yesterday, 23 April, was a historic day for the Salesians of Brazil-Campo Grande (BCG) for the arrival of the 10th Successor of Don Bosco, Fr Ángel Fernández Artime, to the Province. Welcomed by local Salesians and groups of the Salesian Family at the international airport, the Rector Major responded to everyone with a friendly smile and an attitude of paternity, despite the 10-hour flight.

Waiting for him at the "Antonio João" international airport in Campo Grande, one of the country's major airports, was the archbishop emeritus, mgr. Vittorio Pavanello, SDB; the Provincial of BCG, Fr Gildásio Mendes; his Vicar, Fr Elías Roberto; the Provincial Delegate for Youth Ministry, Fr Wagner Luis Galvão; also present were the young in formation, Salesians from Campo Grande, Daughters of Mary Help of Christians, Sisters of the Sacred Hearts of Jesus and Mary, local coordinators of the Association of Mary Help of Christians, Salesians Cooperators and Volunteers of Don Bosco.

"I think they will be very rich days, of great closeness, with much animation, a lot of listening, much sharing. My heart is truly happy in this moment to be among you," said the X Successor of Don Bosco.

During this week, the Rector Major will participate in the celebrations for the 125th anniversary of the Salesian Province, visiting the Salesian works of Cuiabá, Barra do Garças and Meruri; he will then return to Campo Grande on Thursday 25, where he will remain until Saturday 27th.

The agenda of the Rector Major for these days is filled with meetings, first of all with the Salesians of Don Bosco, but also with the young and the Salesian Family. Today, April 24, Fr Á.F. Artime meets the young people of the Salesian Youth Movement and the students of the "São Gonçalo" Salesian Institute in Cuiabá. He then presides over the Eucharist in the Shrine of Mary Help of Christians, in the presence of the mayor of the city, Emanuel Pinheiro, the Governor of the State of Mato Grosso, Mauro Mendes, and other authorities.

Fr Paulo Vendrame, Director of the "São Gonçalo" institute, for his part said that in Mato Grosso the Salesians animate 21 centers, each with a parish, social work and some kind of educational center. "The Salesians arrived in Mato Grosso with two objectives," he explained. "On the one hand, taking care of the education of young people, and on the other hand working among the indigenous peoples. The Rector Major comes at an important time for us, as we celebrate the 125th anniversary of the arrival of the Salesians in the State of Mato Grosso."