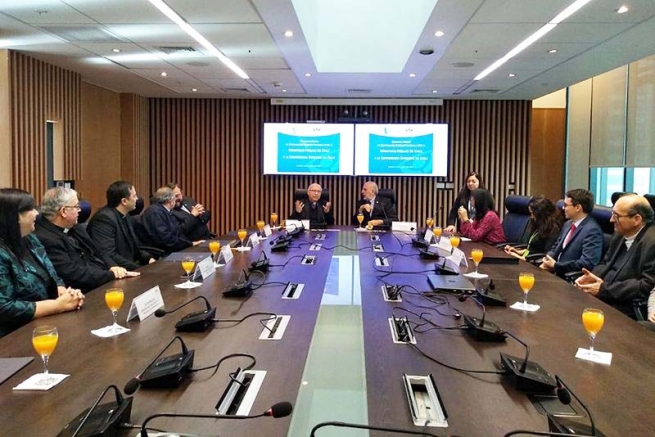 (ANS - Santiago) - The Salesian Province in Chile, represented by the Provincial, Fr Carlo Lira, and with the presence of the Provincial Vicar, Fr David Albornoz, participated in the signing of the framework agreement for collaboration between the Episcopal Conference of Chile and the Public Prosecutor, on Tuesday 30 April.

The agreement reaffirms the Congregation's commitment, as part of the Catholic Church, to provide all information on past, present and future cases that constitute crimes against children, adolescents, young people and people with disabilities committed by Salesian lay or consecrated men and women.

The text states that “the object of the agreement is to facilitate the exchange of information regarding past, present and future investigations into sexual crimes committed by diocesan clerics against children, adolescents or persons in a situation of disability at the time of the events, protecting the confidentiality requested by the people who turned to the CECh (Chilean Episcopal Conference, Editor's Note)".

For Fr Lira, this is the policy that the Salesian Congregation has been implementing since last year, but which from April 30 is formally fulfilled with a document and the signature of all the interested parties.

"With this agreement," the Provincial explained, "we want to take another step forward in the task of ensuring that there is no room in our institution for people who abuse the greatest treasure we have received from the Lord: the young, the most delicate and precious to human society, as Don Bosco himself clearly stated."

The Provincial concluded with the promise that the Salesians of Don Bosco will do everything possible to create safe and healthy environments, "where it is known that those who do not respect the principles that inspire us from the Gospel and our Salesian spirituality will have to assume the consequences of their actions."

Participating in the ceremony were the CECh Secretary General, Msgr. Fernando Ramos; the national prosecutor, Jorge Abbott; representatives of the Marists and Schoenstatt Fathers; the President of the National Council on the abuse and accompaniment of the victims, Ana María Celis; and Msgr. Juan Ignacio González.

Msgr. Ramos also explained in an interview that the previous years were "special years for the Church, of crisis, in which there were a series of very harsh situations, but also opportunities ... that gave the possibility of a greater conversion and renewal."