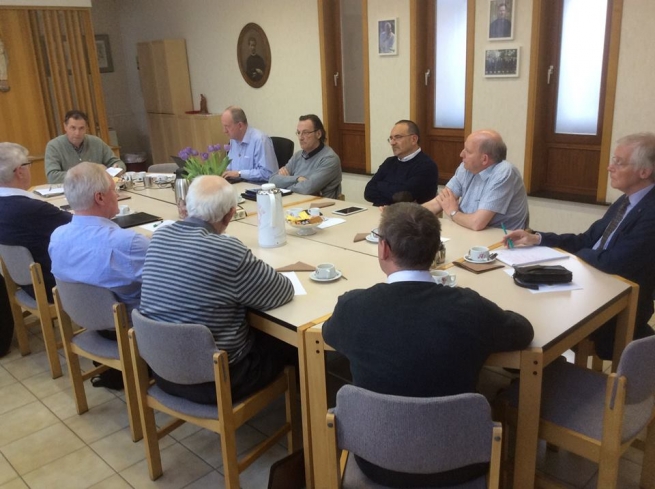 (ANS - Brussels) - The visit of the Rector Major Fr Ángel Fernández Artime to Belgium is still in full swing. He has come in order to get to know the local Salesian situation, to encourage the Salesians in their mission and to suggest the most suitable ways to cultivate and spread the Salesian charism in Belgian society.

As planned, in the afternoon of the first day, Friday 15 April, the Rector Major met with the Provincial Council of the Province of Northern Belgium (BEN) and then with the young Salesians, including three Asian missionaries.

On the morning of Saturday 16 April, the Rector Major, accompanied by his secretary, Fr Horacio López, and Fr Tadeusz Rozmus, Councillor for the region of Central and Northern Europe, reached the Salesian house of Oud-Heverlee. There he got to know the numerous initiatives of the Don Bosco Vorming & Animatie (DBV & A - Don Bosco Training Centre) and had words of appreciation for all the staff.  He told them that they must prepare now for the future so that the Salesian charism can become more relevant, even if the number of Salesians in the coming years continues to decline, provided the lay collaborators are adequately prepared to assume responsibility for the charism and mission of Don Bosco.

In a subsequent meeting with the leaders of the Don Bosco Centre for Schools the Rector Major spoke of the need for ongoing commitment to those most in need. He said that, thanks to state collaboration, the Salesian schools have a great opportunity to develop their identity and this must result in a clear educational-pastoral programme.

Before reaching Sint-Lambrechts-Woluwe, for the meeting with the Salesians of the French-speaking area of ​​Belgium, accompanied by the Provincial of France-Belgium South, the Rector Major greeted and encouraged the Salesians of Oud-Heverlee and especially Fr Jozef Gevaert whom he knew well because of his book on Anthropology which was widely used in Spain when Fr Á.F. Artime was a student.