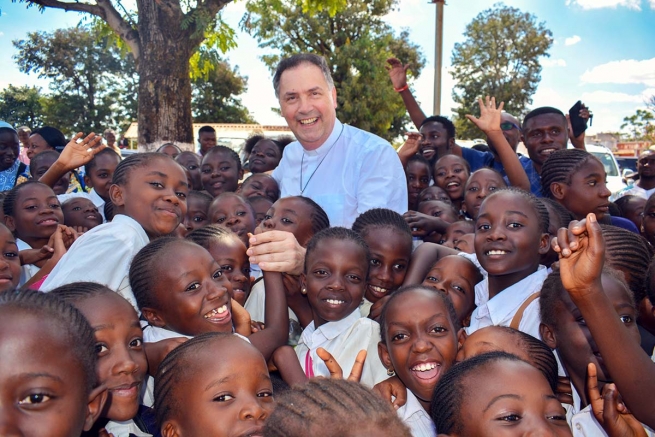 (ANS - Lubumbashi) - Since last Friday, May 10th, until next Saturday, May 18th, the Rector Major, Fr Ángel Fernández Artime is engaged in the animation of one of the most flourishing realities of the Salesian Congregation: the Democratic Republic of the Congo. Precisely because of its constant and ongoing development it has, since 2017, two circumscriptions: the "Central Africa" ​​Province (AFC), based in Lubumbashi; and the Africa Congo Congo Vice-Province (ACC), based in Kinshasa.

The Rector Major landed at Lubumbashi airport, AFC province, on Friday afternoon. Accompanied by his Secretary, Fr Horacio López, he was welcomed by the Councilor for the Africa-Madagascar region, Fr Américo Chaquisse, and by a large delegation from the Provincial House, headed by the Provincial, Fr Albert Kabuge. Having reached the Provincial House, he celebrated the Eucharist, together with Msgr. Jean-Pierre Tafunga, Salesian, Archbishop of Lubumbashi, and representatives of the local Salesian Family.

On Saturday 11 May, Fr Á.F. Artime spent the morning with members of the Salesian Youth Movement (SYM) who for months have been preparing spiritually and with practical activities for the visit of the Successor of Don Bosco. The Rector Major met them at the "Cité des Jeunes", a large center consisting of an oratory, a Vocational Training Center, an internship, and social promotion activities; there he celebrated Mass followed by the exchange of gifts and a Q & A session with the young participants. Before concluding the morning with a moment of fraternal agape, the Rector Major also animated the award ceremony of the "Salesian Games 2019" and presented the trophies to the young winners in the various disciplines.

In the afternoon, on reaching the Theological Studentate, Fr Á.F. Artime animated the Salesians in formation, urging them to live as authentic followers of Jesus in the style of Don Bosco.

Yesterday, Sunday 12 May, in the centenary Institute of Imara, Fr Á.F. Artime presided over a Eucharist for the whole Salesian Family, during which he also received the perpetual vows of five Salesians. Later he made a visit to the future "Marian City", where he laid the foundation stone of the complex to be built, and blessed the work. Finally he concluded the day by gathering with the Don Bosco Volunteers at the “Afya Don Bosco” center of the Lubumbashi-Carrefour work.