Argentina – The Courtyard in the streets ... And the Virgin in the middle 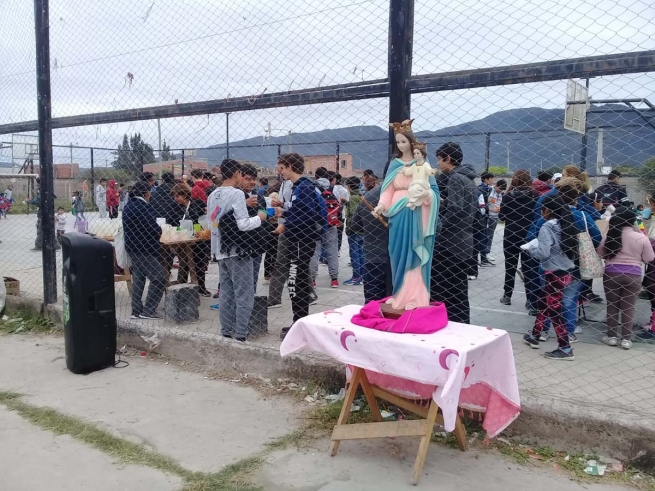 (ANS - Salta) - "The Salesian," said Pope Francis, "is an educator who embraces the fragility of children who live on the margins of society and without a future; he bends over their wounds and heals them like a good Samaritan.” The words of the Holy Father become reality in the different parts of the world in which a Salesian finds himself. As part of the celebrations for the month of Mary Help of Christians, the three Salesian houses in Salta made an important gesture of solidarity and extended the oratory to the whole city.

The communities "Mary Help of Christians - Laura Vicuña", "Ángel Zerda" and "Ceferino Namuncurá" left their traditional courtyards to take them through the streets of the city. Thus, on the morning of Saturday 11 May, three simultaneous oratorial days were held in different areas of Salta, with the aim of bringing everyone a little of the Salesian charism.

School children participated by creating cards and collecting donations. Many were attracted to this proposal and did not miss the opportunity to be in the midst of an oratory. The day left its mark in the hearts of all the participants and Caterina, Nicolás and Betiana decided to share their experience.

"I lived a different Saturday," writes Caterina Torres. "I had the opportunity to share my time with very good people and I learned a lot from them. I could see how the children painted, jumped, ran and enjoyed themselves ... We managed to bring out a beautiful smile on their faces. We prepared a performance on Maria, because our goal was that they would know Her and feel that great love we feel for Her. I learned that with small details you can light up the day of a child, young or adult. It was a very nice experience that I hope to relive."

"It was an experience of Paradise," says Nicolás Martínez. "Seeing most of the animators, the teachers, the parents, the Salesian Cooperators, the Salesians, the members of the Association of Mary Help of Christians ... All together spending a cold morning in favor of the children and adolescents of the area was truly gratifying. Personally, I really liked that to crown it all there was a statue of Mary, not on an altar or a pedestal, but on a wooden table adorned with a pink cloak worn by a mother from the neighborhood and the purple scarf of an animator. That statue, among boys and girls. The Help of Christians and Her Son, in the midst of the slum, celebrating the immense Love."

"Maria took us back to the courtyard. We have lived and shared a beautiful oratorian day ... Happy to see that we are united and we are part of a community that beats to the rhythm of Don Bosco ... Our young people are a great gift. Thank you!" concludes Betiana Durand.