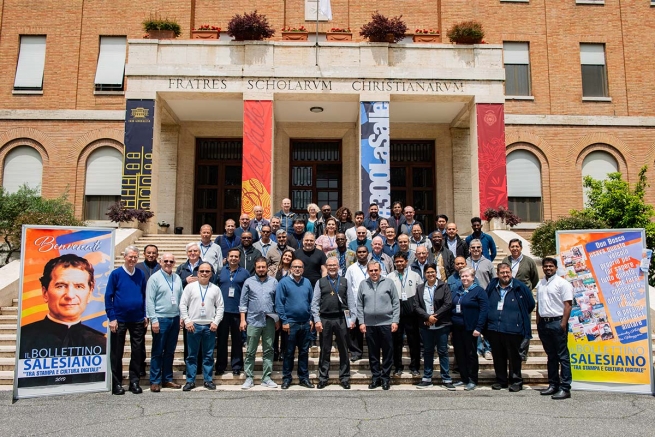 (ANS - Rome) - "The International Meeting of the Salesian Bulletin has ended. Our Rector Major, Fr Ángel Fernández Artime, Editor and Director of the Salesian Bulletin, entrusted us with updating the magazine of Don Bosco, the institutional magazine of the Congregation, taking into account the Salesian Social Communication System (SSCS) and for this reason we reflected on the theme: Communicating to involve in the mission, between press and digital culture," said Fr Filiberto González, General Councilor for Social Communication at the conclusion of the work sessions.

The days of the International Meeting of the Directors of the Salesian Bulletin began on Sunday 26 and ended on Wednesday 29 May. Fr Á.F. Artime presided over the opening Eucharist and gave a lecture inviting all present to seek ways of renewal, with creativity and professionalism. "The Salesian Bulletin is not an invention we made in the early nineteenth century; Don Bosco had carried it in his heart for a long time. Don Bosco was certain that the Salesian Bulletin was to be a means of communicating the good that was being done, first of all, as Salesians, and then as a nascent Salesian Family."

Among the speakers there was Fr Francesco Motto, SDB, who helped place the Salesian Bulletin in the social, ecclesial, cultural and communicative context of Don Bosco's time; and the theologian Nataša Govekar, who emphasized that communication is at the service of communion and truth and that the image has a primordial value as an element of communication. Nicola Zamperini and Francesco Marino urged changing the paradigm by opening the magazine to other platforms and to current languages of information.

Journalist José Beltrán also gave his contribution, and pointed out that the magazine Vida Nueva has entered the conversion of content in a collegial, institutional and prophetic way. Esteban Lorenzo, for his part, indicated that the technology must be at the service of people. Br José Luis Muñoz, SDB, invited everyone to work closely and in contact with the Salesian iNfo Agency (ANS). Also discussed were the good practices developed by some Salesian Bulletins in: Argentina, Ethiopia, France and Portugal.

"We must also thank the Dicastery for Social Communications and Miguel Mendes, from Portugal, who created the logo of the meeting, in addition to the Rector Major, ‘Misiones Salesianas’ of Madrid and ‘Missioni Don Bosco’ of Turin for their support," added Fr González.

The meeting ended with the participation in the audience on Wednesday of Pope Francis. The Holy Father was moved when he heard Fr Leonardo Sánchez, a Spanish Salesian, tell the story of Fr Antonio César Fernández, a Salesian missionary recently assassinated in Burkina Faso. He was again moved on receiving the book of Fr Vicente Santilli on Fr Luigi Bolla.