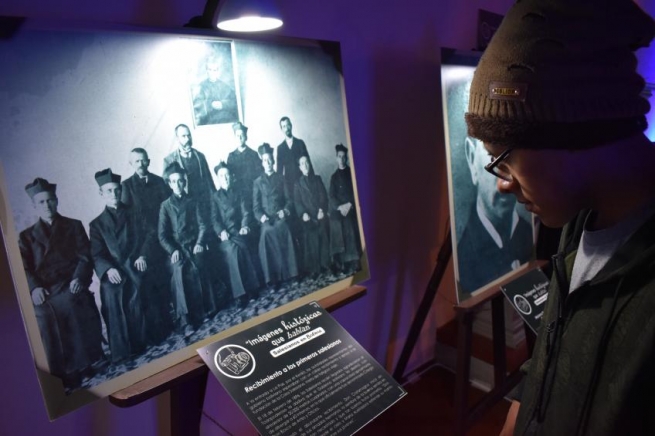 (ANS - La Paz) - The "Basic Contract" signed in Rome, and after the fatal accident among the trains carrying mons. Luigi Lasagna and his 14 companions, which crashed at the beaches of Plata in 1894, the Spiritual Sons of Don Bosco arrived in Bolivia, in February 1895.

According to the stories of Alberto Aramayo Zalles, SDB, in the book The first Salesians in Bolivia, written in 1976: "Don Bosco never went out of Europe, but he knew Bolivia and it was familiar to him, as were all the other South American nations; he knew it through his visions and his extraordinary intuitions."

In 1883 Don Bosco had a mysterious dream: he was travelling in South America as a passenger on a fast train. In that dream, Providence showed him the camp destined for his children, the Salesians. Years later, with the arrival of the first Salesian in Bolivia, Msgr. Giacomo Costamagna, SDB, began the construction of an Arts and Crafts Formation Center for Bolivian young people, promoted by Dr. Aniceto Arce, then President of the Republic.

Today the "House of Aniceto Arce", as it is known within the municipal historical heritage, currently called "Academic and Cultural Center of the Salesian University of Bolivia", opens its doors to people who walk about the city every year, around these dates, breathing history, culture and artistic expressions.

In the XIII edition of the "Long Night of Museums" organized by the Autonomous Municipal Government of La Paz, the Salesian University dresses up as a gala event and exhibits a photo exhibition entitled "Salesian images that speak", which includes two aspects. The first is the historical aspect, which describes the glorious past of the Salesians; and the second is the academic aspect, which shows the result of a process in the university community.

The photographic exhibition had as its strategic partner the Bolivian publishing house Editorial Don Bosco, which proposed selected printed works, with publications from 1920. These works were part of the memories of many visitors, because many of them looked with nostalgia at the books with which they had learned to write and read. Some ancient books are still today masterpieces, which despite the years continue to be printed and continue to be part of the teaching of the history of Bolivia.

The evening was full of memories and emotions for thousands of visitors who had the opportunity to appreciate the Salesian opus, written through and across 123 years with the Salesian heart, and represented by 31 photographs that are "historical images that speak".