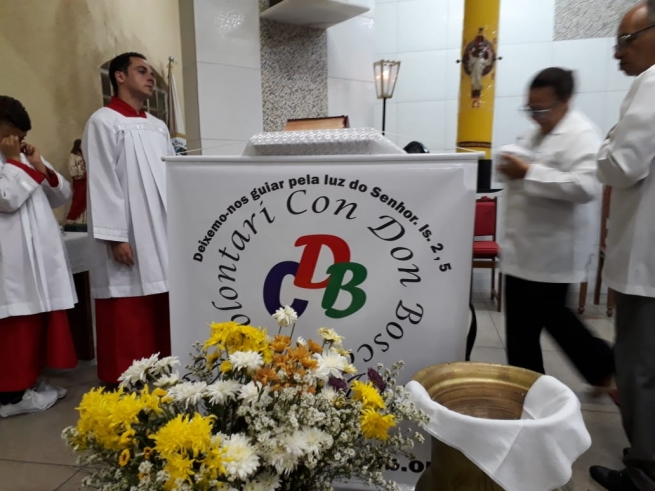 (ANS - Porto Alegre) - The Secular Institute of "Volunteers with Don Bosco" (CDB), one of the groups of the Salesian Family, celebrates its 25th anniversary this year. In 1994 the then Rector Major, Fr Egidio Viganò, betting on the vocation of some young people, proposed the foundation of a secular institute called "Volunteers" to them. The group is currently present in 27 countries and has about 95 members. In Brazil, Luciano, from Leopoldina, in the State of Minas Gerais, is the referent for Vocational Animation. Recently he visited some young candidates from the Provinces of Porto Alegre and Sao Paulo.

Luciano, how did you learn about the Institute?

My vocation is born of devotion to Saint John Bosco. I have always enjoyed working with young people; my gaze was fixed on them with the sole objective of working among them with Don Bosco's charism. Through a sister of the Congregation of Saint Marcellin I met the Salesian Congregation. This is where I started the formation process to enter the Institute. I spent three years preparing for temporary vows. I received my first consecration at the end of 2009 in Rome, and then I continued my formation in preparation for perpetual vows, which took place on 5 January 2018, in Rome, in a celebration presided by the Rector Major, Fr Ángel Fernandez Artime.

What is special about the vocation of the Volunteer with Don Bosco?

The contribution to the Salesian mission is to live the charism of Don Bosco among the young, working in social works, in parishes, in schools. Our apostolate is in the world, but also with the Congregation. Our spirituality is rooted in the figure of Jesus, the Good Shepherd.

How do you accompany young people on their vocational journey?

The young person is always introduced by someone from the Salesian Family. Starting from the interest of the young person, he makes the request for vocational accompaniment and then generally the Provincial appoints a priest for this accompaniment. For this phase we have the formative project, the Constitutions and the Regulations; and a formation meeting is held monthly in a Salesian house.

First of all, I want to say that we are not an isolated group; we are a group of the Salesian Family. We are also together in vocational accompaniment for the other groups in our family. Secondly, one of the things the Rector Major asked of us is fraternal sharing with the other groups of the Salesian Family. Also among us, as Volunteers, we must live this fraternity, always attentive to the life of our brothers, even if we do not live in the same house. Because even if we do not live in community, we still live in fraternal communion.