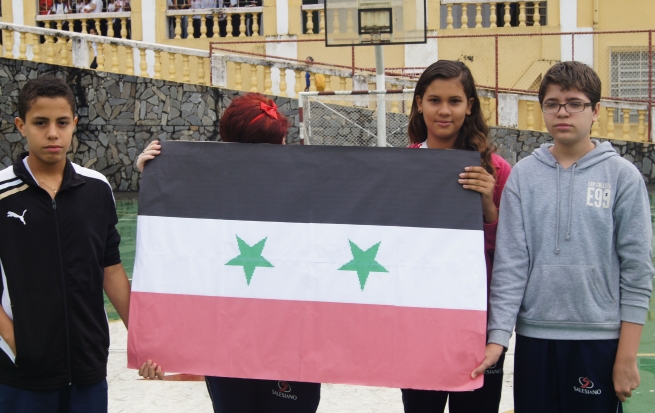 (ANS - Rome) - "To what extent are we prepared to take on other people's suffering, limiting our own lifestyle to make room for those in need?" This is the question some of the Salesian Cooperators in central Italy asked themselves. Their answer was that in the face of the horrors of war it is worth facing the bureaucratic complications and difficulties to restore serenity and dignity to those who are seeking help.

"The first time we saw the war on television, it seemed far away.” This was what one Syrian couple said when they reached Italy. “Then our house was hit and we had to move to live in the city centre. For three years we lived, four of us in one room, while continuing to believe in our values and to participate in the activities of the oratory, which has been a help to us."

Because of the war the couple had lost their homes, their jobs and the possibility of sending their children to school, since many buildings were requisitioned by the army.

While this was happening in Syria, the two Salesian Cooperators took advantage of the Fourth Regional Congress of the Association of Salesian Cooperators held in Pianezza (TO) in April of 2015, to propose to the Delegates and Coordinators of the Italy-Malta-Middle East region to welcome a Syrian family to Italy during the summer, to participate in a training program that had already started. Shortly thereafter a Syrian family asked to come to Italy with their children without contravening the laws because their life had become impossible on account of the war.

Thanks to the intervention of the Association of Salesian Cooperators and the NGO "Circles of Wave" their request has been met. When they arrived in Italy they found invaluable from the human network that has been created, thanks to the generosity of people of Don Bosco Boys Town, the Astalli Centre and Caritas. They received great help from the ordinary people who were able to give of their time to find accommodation and all the essentials for this family through so many unexpected little miracles.

One of the project coordinators said: "Wanting to respect the law we often clashed with the red tape of the bureaucracy, and we found several obstacles along the way, but it all went well, and we were able to give this family a taste of normal everyday life. It was a good example of a shared act of mercy.”