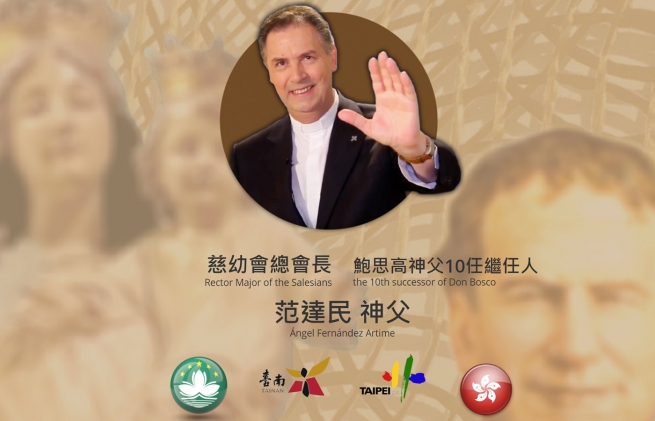 (ANS - Hong Kong) - This year the Rector Major will spend Don Bosco's birthday in the Far East: starting next Sunday; in fact, from 11 to 17 August, Fr Ángel Fernández Artime will be on an Animation Visit in Macao, Taiwan and Hong Kong.

Accompanied by his Secretary, Fr Horacio López, the 10th Successor of Don Bosco will reach Macao on early Sunday afternoon and will have a first moment of dialogue with the area's active Salesians.

On Monday, the program includes a visit to some of the most significant Salesian works in Macau, such as the "Escola Dom Luigi Versiglia", where the Rector Major meets students and young people of the institute. In the afternoon there will be time to meet the Salesian Family and to celebrate the Eucharist together, in the church dedicated to St. Lawrence.

On Tuesday morning, the Rector Major meets with the young people and members of the Salesian Family present in Tainan; on Wednesday, he will learn about the work carried out by the Spiritual Sons of Don Bosco through a kindergarten and a parish in Taipei.

For the solemnity of the Assumption of the Virgin Mary, Fr Á.F. Artime shall preside at the Eucharist and receive the perpetual vows of a young Salesian. He will then reach Hong Kong in the early afternoon and will thus have the opportunity to gather at the Provincial House with the Superior of the "Mary Help of Christians" Province (CIN) and his Council.

On Friday, August 16, the 204th anniversary of the birth of Don Bosco, the Rector Major will spend the day surrounded by young people and the Salesian Family.

The Rector Major will dedicate the last day of his visit to the traditional appointment reserved for talks with all the Salesians in the Province and to receive the perpetual professions of three other Salesians.

To stay up to date on the Rector Majorìs visit, the CIN Province provides various channels.