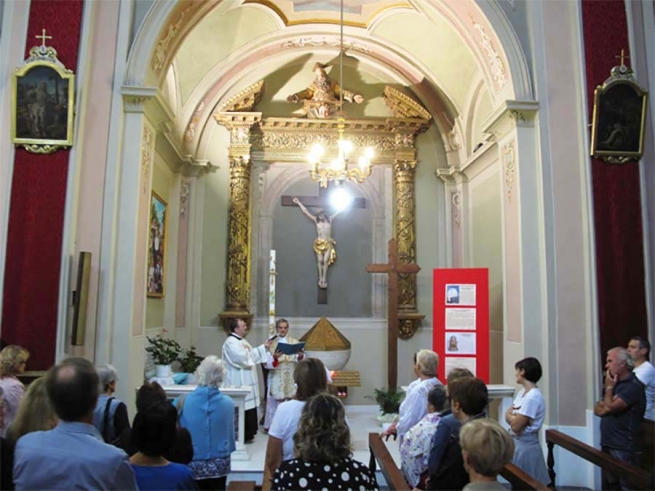 (ANS - Corteno Golgi) - The birthplace of the blessed Maria Troncatti (1883-1969), ie., Corteno Golgi (Brescia), thanks to the pastoral commitment of the parish priest, Fr Alessandro Nana, and to the great love of the whole civil and religious community for its distinguished citizen, wanted to commemorate and celebrate in solemn and participatory form the 50th anniversary of the birth in heaven of this Daughter of Mary Help of Christians, a missionary among the Shuar of Ecuador.

On 24-25 August 2019, various moments helped to recall the testimony of Sr. Troncatti, beatified 24 November 2012, and together underline the relevance of her message in this year in which the Pan Amazon Synod is celebrated and in the imminence of an extraordinary missionary month of October, wanted by Pope Francis on the occasion of the centenary of the promulgation of the Apostolic Letter Maximum illud by Pope Benedict XV (November 30, 1919).

A first sign, offered by nature, was a rainbow that enveloped the sky of Corteno Golgi on the evening of Saturday 24 August, as if to confirm the mission of Sister Troncatti as a woman of peace and reconciliation. Even 50 years ago, at the end of the missionary's funeral, a rainbow appeared in the sky of Sucúa (Ecuador), to seal the offer made of her life for the reconciliation between the Shuar and the white settlers.

On the same evening, a solemn concelebration was held in Corteno Golgi presided by the Postulator General for the Causes of Saints of the Salesian Family, Fr Pierluigi Cameroni, SDB, with the participation of several native priests of Corteno. In the homily, inspired by the Gospel of the day that spoke of the need to "strive to enter through the narrow door", Fr Cameroni recalled how Blessed Maria Troncatti not only dedicated her life to the little ones, to the poor, with a mother's heart, to the sick and to the missionaries, but above all how she gave herself in a gift of love for the good of the people to whom the Lord had sent her as a missionary.

Through six stages in especially meaningful places across town, an evocative Via Lucis followed which proposed the luminous testimony of this Daughter of Mary Help of Christians as a woman of faith, daughter of her land, announcer of the Gospel to children and to the poor, disciple of Christ on the Cross, devoted daughter of Our Lady, example of missionary charity.

On Sunday 25 August there were several celebrations. In particular, in the parish church, near the baptismal font where Maria Troncatti was baptized, the Christian community renewed its baptismal promises, asking, through the intercession of the blessed, that the grace of the baptism of each bear fruit in ways of holiness, and confirming the commitment missionary of the Church, in the announcement of salvation in Jesus Christ, who died and rose again.