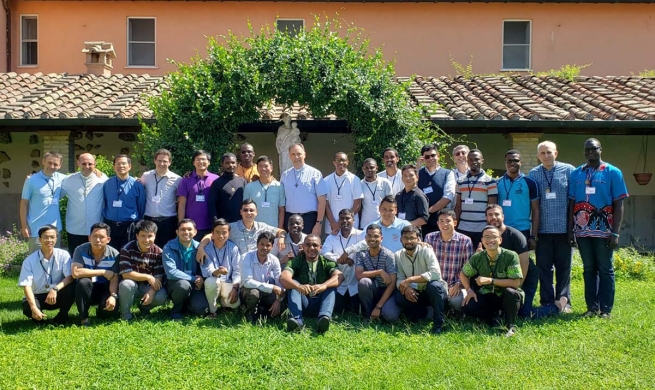 (ANS - Rome) - Next September 29, in the Basilica of Mary Help of Christians in Turin-Valdocco, a gesture will be repeated for the 150th time, a rite that is within the heart of the Salesian charism: the sending of missionaries ad gentes, ad extra, ad vitam - missionaries, that is, sent to other peoples, outside their country of origin, committed for life. In view of such a large step, last Sunday, 1 September, the Orientation Course for new Salesian missionaries began.

The first part of the course takes place in Rome this year at the Salesian community of San Tarcisio, near the Catacombs of San Callisto. Under the guidance of the General Councilor for the Missions, Fr Guillermo Basañes, and his team - Fr Gianni Rolandi, responsible for missionary formation, and his successor, Fr Joseph Nguyen Phuoc, from the Vietnam Province - (VIE) the new missionaries are receiving an orientation these days on intercultural missionary dynamics, so that they can adequately approach the challenges that await them in new mission contexts.

Yesterday, 4 September, the missionaries also received the visit of Fr Ángel Fernández Artime, Rector Major, who underlined in a paternal intervention the meaning of their being at the service of the most needy young people.

As in past years, the course includes a second part of formation specifically dedicated to the deepening of Salesian and missionary spirituality in Salesian Places, to be carried out in the days prior to sending.

There are 36 spiritual Sons leaving with the 150th Salesian Missionary Expedition.

-one will go to Africa;
-one to Oceania;
-three to Asia;
-six to the Middle East;
-ten to Europe;
-and as many as 15 to Latin American countries.

While waiting to celebrate with the solemnity that the 150th Salesian Missionary Expedition deserves, let us remember the words of Don Bosco: "One of the most worthy works of praise and support is that of the missions among foreign peoples" (MB XVIII, 785).