Spain - The Rector Major to young people: "Ask the Lord what is his dream for you!" 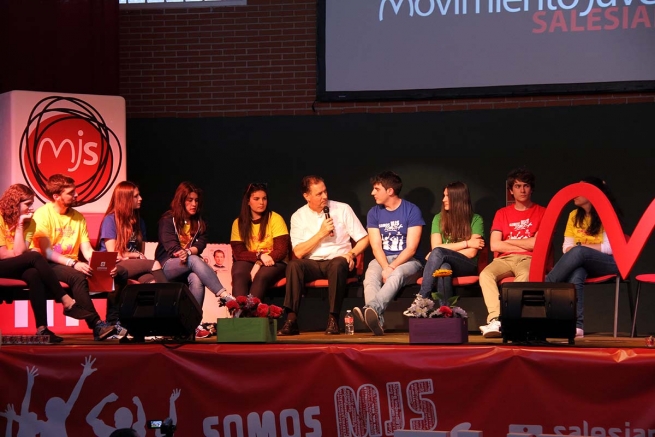 (ANS - Madrid) - In the course of a really festive occasion, Fr Ángel Fernández Artime, Rector Major, presented himself as a father, offering the appropriate word to each group he met. Meeting the 400 Salesians he spoke to them from the heart: "We have a beautiful Congregation"; "We are people of faith, with our weaknesses", but with "a common project" and "we do a lot of good."

During his visit he was met by various groups of the Salesian Family. He had a meeting with those engaged in vocational training, one with teachers, another with parents of the students whom he called "a heritage" and "schools of humanity". But the one he looked forward to most was the meeting with young people.

On Saturday 30 April, over a thousand young people from the Salesian Youth Movement celebrated a big festival with the Rector Major at the Salesian Institute of Carabanchel. Their motto was: "You are more, we are more." The festive atmosphere spread in the multi-purpose hall, where a show was staged as part of the meeting. The Rector Major could not hide his happiness: "It's an incredible joy to be here." Then some young people took the stage for a dialogue that engaged the interest of everybody present.

Asked about how he discovered his vocation, Fr Á.F. Artime recalled "a lady who encouraged my parents to send me to a Salesian school. It was the seed of my vocation." Some years later he ended up taking part in a vocational experience with the Salesians. The support of my parents was crucial at that time. And, of course, "there was always God at the back of it all."

One young man asked straight out, without any preamble, "What are the qualities needed to be a Salesian?" The Rector Major then answered precisely: "A passion for Jesus Christ and for the style of Don Bosco."

Fr Á.F. Artime was very clear when he was asked if there was a crisis of Salesian vocations: "I am convinced that God is calling many young people." Later he added: "If you lose the ability to dream and to have ideals, you begin to become old even if you are only twenty-five.” The ability to dream is the first key to becoming saints. And the other key is: "To say to God: 'Lord, what is your dream for me?'". The question resounded in the heads and hearts of those present during the time of prayer which ended the first part of the meeting.

Further information can be found on the blog https://visitarectormayor.wordpress.com and fore more photos visit https://www.flickr.com/photos/140626487@N08/sets/