Ecuador – Fr Jaime Chela: "As a Church we must accompany our indigenous brothers" 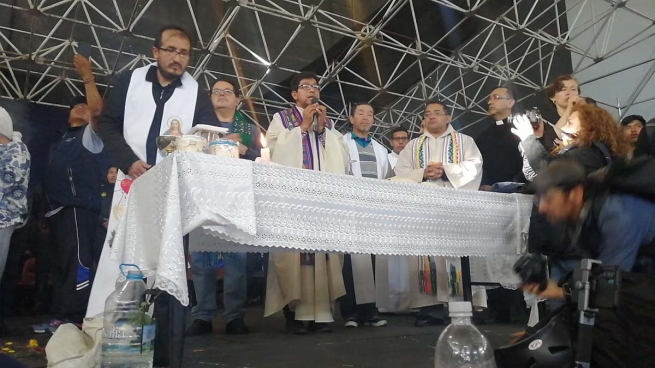 (ANS - Quito) - In the Salesian Constitutions it is specified that the option of every Salesian religious is to be with the poorest. This is what Fr Jaime Chela did with the indigenous peoples, whom he got to know closely when he served his pastoral service for several years in the Salesian missions at what were high altitudes. His work was to accompany them and give them a message of encouragement, according to the Gospel, in and through this social and political crisis that the country is experiencing.

Fr Chela is currently Provincial Secretary and Technical Director of the Pastoral of the Salesian Polytechnic University (UPS). Together with the university's authorities and students, he has collaborated in all the activities to offer hospitality and welcome to the thousands of indigenous people who in recent days have found acceptance in the Salesian house.

Starting from your Salesian vocation, did you think you would find yourself immersed in these difficult moments?

The truth is that this was not expected; but given the situation and the arrival of our indigenous brothers at the university, we could not remain indifferent. From the beginning, we have tried to be with them so they could feel our support, as we Salesians have done in their communities.

What was your experience in this way of doing pastoral work?

It was a complex situation from the point of view of the logistical organization: reception, food collection, preparation, distribution ... In all this, the action of the FEUPS students (Federation of Students at the Salesian Polytechnic University) was fundamental; they responded 100%. On the other hand, it is a very nice experience to be able to stay among them and understand their situation.

What did you feel when presiding over a Eucharist with so many people after the death of an indigenous brother?

I was outraged by the indifference of the media because they did not make known the whole reality and the violence that was being experienced. As a religious I tried to respond to what was happening, to make the indigenous people feel that the Church was with them. I also felt the government's indifference to this lack of listening, for this lack of dialogue, for believing that it was only the indigenous population and not all Ecuadorians, when instead the measures concern everyone.

What would you say to a young Salesian who could be faced with a situation like this tomorrow?

It is important that we Salesians are immersed in the social and cultural realities lived by our indigenous brothers and sisters, and that we always remain close enough to them to know how to accompany them. In this sense we must walk with them, as Pope Francis tells us, so as not to remain indifferent to the problems of the poor.

What was the happiest moment of this crisis?

It was when the government agreed to talk. But now we have to be cautious ...