Italy – Istituto "Pio XI" of Rome: a "House of Life" for many persecuted 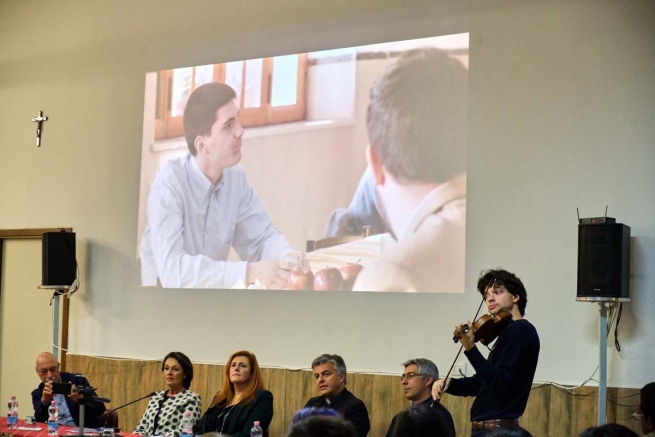 (ANS - Rome) - On the occasion of the 75th anniversary of the Liberation of Rome from the Nazi-Fascist occupation, and in the 90th anniversary of the foundation of the Salesian Institute "Pio XI", on Friday, 18 October, the International "Raoul Wallenberg" Foundation (IRWF) delivered the plaque identifying the Pio XI Institute as "House of Life", having been a place of refuge and salvation for a number of Jewish citizens unjustly persecuted during the Second World War. On this occasion, the docu-fiction "LO SCUDO DELL’ALTRO - La Memoria del Dovere, or the Shield of the Other – the Memory of Duty", produced in collaboration with the Salesian Historical Institute (ISS), Senape Production, "Madriland Art" and "Centro Cooperazione Culturale" was presented.

Rome, autumn 1943. The city is under Nazi siege. In a climate of fear, there is news of Nazi-fascist militia scouring the Jewish ghetto. But a few bulwarks of justice and humanity remain, far from the headlines of the time, and still allow for reflection on what man can really do: choose to act.

Fr Armando Alessandrini and Fr Francesco Antonioli were respectively the Economer and the Director of the Salesian Institute "Pio XI" of Rome, a religious school and boarding house in the Appio-Latino district. It is from these two men, before being priests, that the idea of ​​making the institute a "safe haven", a home that welcomes and gives hope to about 70 Jewish children, is born. Hidden and merged amid all the students of the school, these teens, sometimes children, learned Christian songs, prayers and customs and, in return, found brotherhood, acceptance, life.

The Salesian Institute remained firm, a sanctuary, in what was an inferno, thanks to its open doors open like welcoming arms. "We did but our duty," they would say after the war, when they were thanked and finally, years later, recognized as "Righteous among the Nations."

For this reason, on Friday 18 October, a tribute was paid with the awarding of the "House of Life" plaque to the Pio XI Institute. Doing the honors were the Provincial for Central Italy (ICC), Fr Stefano Aspettati; the Director of the Institute, Fr Gino Berto, and the Dean of the Institute prof. Marco Franchin.

The following then spoke: Uriel Perugia, Secretary General of the Union of Jewish Communities of Italy (UCEI); Msgr. Gianpiero Palmieri, auxiliary bishop of Rome, Silvia Costantini, Vice-president of the IRWF, and Elena Colitto Castelli, Responsible for Italy of the "Houses of Life" project.

The ceremony then continued with the presentation of the aforementioned docu-fiction, interpreted by the students who today attend "Pius XI", who were asked to literally put themselves in the shoes of the children of that time. Then followed words by Fr Francesco Motto, of the ISS, on whose research the docu-fiction is based; the playwright Roberto Russo, author of the text, and some of the performers.

The event ended with the unveiling and blessing of the souvenir plaque posted in the atrium of the Institute.