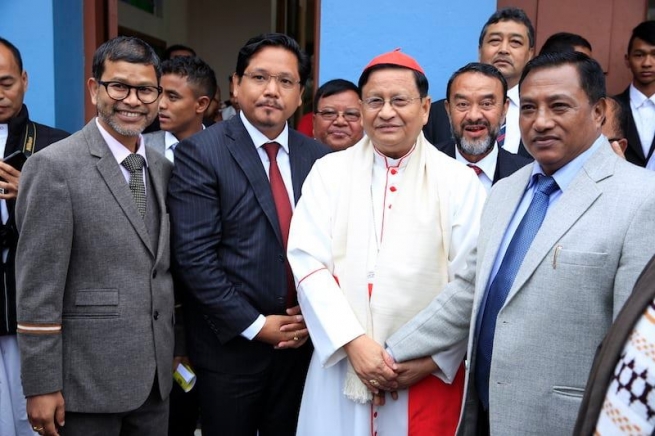 (ANS - Shillong) - Salesian Cardinal Charles Maung Bo, Archbishop of Yangon, Myanmar, and President of the Federation of Episcopal Conferences of Asia, spent a week in North East India, from 7 to 13 November. It was his first visit to the region, known as the cradle of the Salesian charism in the country, and was marked by several exciting moments - above all, certainly, the Eucharist presided by the cardinal in Shillong before 200,000 faithful.

Cardinal Bo began his pastoral visit at the Salesian Institute of Sonada, where he spoke with the staff and students of the institute and recalled the long bond between the center and the Salesians of Myanamr, who to a large extent were trained there, given that up to ten years ago the present Vice Province of Myanmar depended on the Calcutta Province. On this occasion, he also presided over the presentation of a book tracing the history of the educational center (Salesian College - A History that Speaks Today - Salesian Institute). He then visited the bishop of Darjeeling.

In the following days, the cardinal reached Guwahati and from there Shillong to fulfill a vow made to a missing friend: the late Salesian Archbishop Msgr. Dominic Jala, recently passed away in a car accident in USA. In memory of Msgr. Jala, the cardinal wanted to keep faith with the commitment by going to the region and visiting the community.

He was also the main celebrant of the solemn Eucharist, followed by a Eucharistic procession, celebrated for and by about 200,000 faithful originating from the Khasi and Jaintia hills. Many faithful were impressed by his ability to communicate with them in their language. The Salesian prelate had words of great encouragement for them: "I was told that you Khasi are the first tribe, among the many in Northeast India, that God has chosen to share the gift of faith. Like the Israelites, you are the people who have been chosen in a special way, you are blessed by God. Today we can certainly see how you have responded wholeheartedly to the call of the Lord, and with your 'yes' you live the gift of faith so intensely. Following your example, many other tribes have embraced Christianity. You are all apostles, and you preach not with words but through your life testimony. May the Lord bless you a hundred times."

The cardinal then added: "I have heard so much about the Church in the North East of India. I was inspired by the stories told by Archbishop Jala about your profound faith and the spread of the Gospel. I have heard of the Khasi people and their love for the message of Christ. Yours is a vibrant Church, it transmits plenty of emotion and spiritual energy to me."

And he also addressed a personal thought "to the beloved archbishop", recalling how "the Eucharist was for him the source and summit of the spiritual life," and he invited the faithful to follow his example, "experiencing God, the living, loving and liberating God."

After making a crowd hear a recording of the last interview with Msgr. Jala – a recording that was supposed to serve as farewell at the end of the cardinal Bo's journey, but that ended up being an emotionally moving commemoration of Msgr. Jala - and a passionate intervention on the value of the Eucharist for the Church, the cardinal concluded his talk by inviting everyone to answer with faith and with the Gospel to the challenges of poverty and injustice, which also cross the region of northeastern India.

In the course of his visit, the Burmese cardinal presided at the Eucharist in the Theologate of the "Sacred Heart", Shillong, an institute that has formed hundreds of priests for the region and the Church. He also visited many important institutions and training centers, again at Shillong, meeting civil and religious authorities, Salesians and young people in formation.

Among other activities in the region, he inaugurated an amphitheater in Siloam, a leadership center in Umiam, near Shillong, and visited the tomb and family of Archbishop Jala.

In Shillong and Guwahati he addressed the Salesian Family, where he spoke of his country, Myamnar, which has experienced decades of military domination, and of the struggle it continues to face, even though a civilian government is gradually emerging. Speaking of the Church in the country, he stressed the role that the Catholic Church is playing in building peace between the many religious and ethnic communities, through interreligious dialogue.

Before leaving Guwahati for Calcutta, traveling to Yangon, the cardinal expressed his gratitude to God and the people of the region for the warmth, hospitality and spiritual fervor he witnessed.