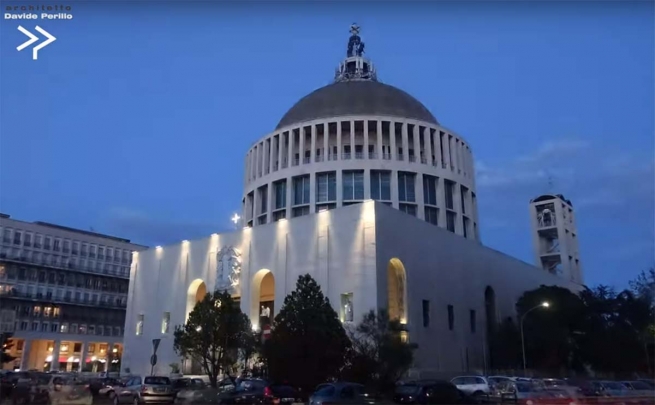 (ANS - Rome) – For the Parish of "San Giovanni Bosco al Tuscolano" 2019 represents an important year: 60 years have passed since that 2 May 1959 when the Parish officially began its pastoral life in the Temple dedicated to the Saint of Young People. To commemorate this event, several initiatives were launched on the Solemnity of the Immaculate Conception on Sunday 8 December 2019.

On Sunday 8 December, the Cardinal Prefect for Institutes of Consecrated Life and Apostolic Life Societies, His Eminence Joao Braz De Aviz presided over the Eucharist at 11.00 am administering the Sacrament of Confirmation to the children of the Parish at the end of their formative journey.

At the end of Mass, the video-photographic exhibition of the history of the Basilica and of the Salesian work from its origins to the present day was inaugurated, and can be seen in the Temple until 2 February 2020. Finally, as per the Salesian tradition, in Piazza San Giovanni Bosco, in front of the Basilica, the traditional "Mariano Circle" was held: with the families, children and young people of the Oratory commemorated the meeting between Don Bosco and Bartolomeo Garelli; an Ave Maria then concluded this much participated moment.

In the afternoon, the new lighting of the Duomo, the recent restoration object, and classroom of worship, was inaugurated. The Vicar of the Rector Major, Fr Francesco Cereda, presided over the Thanksgiving Eucharist, concelebrated by the confreres who served as Directors and / or Parish Priests. At the end of the celebration, Fr Francesco then blessed four commemorative plaques of the "visits" of 4 Saints to our Basilica: St. John XXIII; St. Paul VI; Saint John Paul II and Saint Teresa of Calcutta.

At 7.00 pm the Italian Army Band held a concert in the Basilica that was especially appreciated by the many people present. After the National Anthem, the last piece performed by the Maestri della Banda, a fireworks show concluded a day full of events, meetings, prayers and that sense of thanks expressed by the faces of all the people who participated in the events.

The much-felt participation of people in these events once again gave testimony of the affection that people have for Don Bosco and for the Salesians who have worked and still work in the Parish. The emotion and joy in everyone's eyes gave voice to thanks to God for the gift that these 60 Salesian years represented for the District and its people.