RMG - Visit of the Pope to Azerbaijan. The Salesians are preparing 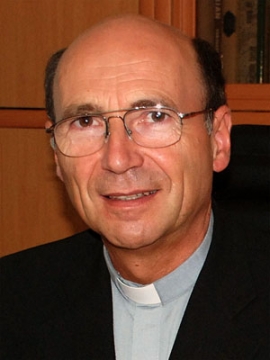 (ANS - Rome) – Next autumn the Pope will visit Azerbaijan and Georgia, the second part of a trip to the Caucasus which will start in Armenia in June. We asked Monsignor Vladimir Fekete, SDB, for a comment. He is the Apostolic Prefect of Baku, the Azerbaijani capital,

Did you invite the Pope or was it his initiative?

The first move came last year from the President of Azerbaijan, Ilham Aliyev, when he went on an official visit to the Vatican. On that occasion he invited the Pope. In Armenia they wanted a papal visit last year on account of the centenary of the genocide but he himself proposed the following year. So the Apostolic Nuncio, Archbishop Marek Solczyński, intervened in the talks, suggesting a trip to the three countries of the Caucasus in 2016.

What do you expect to be the deeper significance of this trip?

I would like to start from 2002 when Azerbaijan received for the first time a papal visit by Pope John Paul II. It was a great grace for us, we had been present in the country for just two years and the visit went very well. We are still reaping the fruits. Just to name two - the recognition of the Catholic Church as a Church traditionally present in the country and then the gift of a plot of land from the President to build a new church to replace the one destroyed in the time of Stalin.

Today, 14 years later, the Pope is returning to this overwhelmingly Muslim country. It is a great encouragement for our small Catholic presence and also for the Azeri people. It is an example of integration, acceptance and tolerance. The Pope's visit will also strengthen the initiative of the State to maintain the spirit of respecting differences and crediting the role of the Church in this regard.

In addition, it could help to strengthen the diplomatic and peaceful forces in the context of the tensions that still exist in the region.

Are you already preparing for this event?

The announcement was made on Saturday 9 April and the following day the Nuncio called me and asked me to prepare a draft of the programme. Our Salesian community - six priests, three brothers and a young Azeri in formation to become a deacon - represents the entire clergy of the country. Then there are the Missionaries of Charity who are very active with the elderly and the poorest of society, and since last year also two Daughters of Mary Help of Christians who have come with a view to starting a community in Baku. We are few, but we intend to welcome Pope Francis the best we can and, if he wishes, we Salesians can host him in our house!