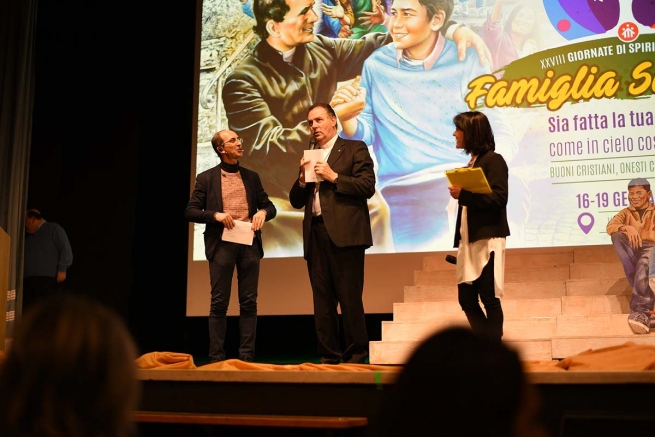 The meeting began at 16:30 local time, at the large theater of Valdocco, with the screening of a video of good wishes to all participants and the welcome of Fr Enrico Stasi, Provincial of Piedmont and Valle d'Aosta (ICP ). "It's wonderful to think that Valdocco is the home of the Salesian Family in the world ... We hope to live together the spirit of Don Bosco which gave birth to us all as a Salesian Family," said Fr Stasi.

Then, on the theater stage, animated by the lively and interactive direction of Fr Moreno Filipetto, SDB, Fr Eusebio Muñoz, Delegate of the Rector Major, illustrated the meaning of the appointment and the program of the Days: “Every year, we of the Salesian Family have the opportunity to meet to share a few days of gathering around a theme suggested by the Strenna of the Rector Major ... In reflecting together on the Strenna, we recognize the Rector Major as the center of unity of the whole family. This reflection helps us to focus the attention of the missionary dimension in our groups on the proposal that he offers. With the Strenna we look together with Don Bosco.”

The event then continued with internalization and prayer on the theme of the Strenna by the "Adonai Group", which uses dance and the performing arts as vehicles for spreading the message of the Gospel.

The climax of this first day was reached with the projection of the Strenna 2020 video (available in the various ANSChannel language channels) and the commentary by the Rector Major, Fr Ángel Fernández Artime. He began speaking expressly about the value of the Strenna: “This tradition, already used in Don Bosco's time, is today a universal message all over the world. In all the Salesian realities active in the different countries, there is always the reference to the Strenna of the year. It means that it is truly a help to continue our common mission.”

After the presentation, the Rector Major also answered some questions from those present, and the last moment of the day was the evening prayer animated by the Salesian novices and the thought of Fr Á.F. Artime's 'Good Night', on the 'secret' of the Salesian schools of holiness in Valdocco in the years in which Don Bosco lived within those walls.

You can continue to follow the event through the live broadcasts (in Italian, English and Spanish) on the ANS Facebook page.

Other resources are accessible on the website https://salesianfamilydays.com/ and on ANSFlickr.