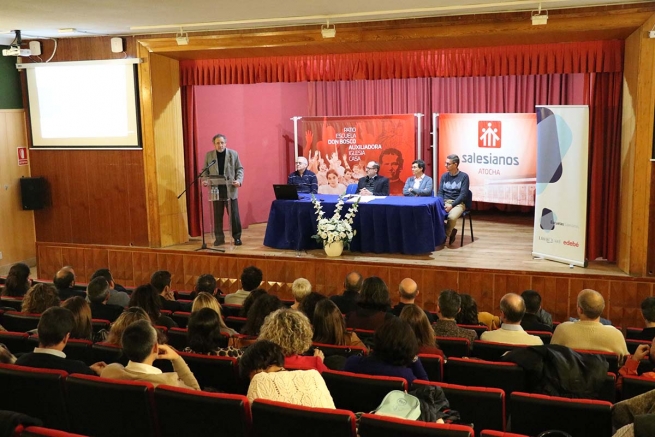 (ANS - Madrid) - On 17 January, the ceremony for the awarding of diplomas to teachers who took part in courses in Management of Educational Centers and Pastoral Coordination organized by the Salesian schools was held at the Atocha center in Madrid. The event represented the final act of this training course, which included both face-to-face lessons and digital lessons, and saw 80 participants from the Salesian schools in Spain. Teacher training is one of the key elements to offer quality education that responds to the challenges of today's society.

During the ceremony, prof. Rafael Díaz Salazar, professor of Sociology and International Relations at the Faculty of Political Sciences of the Complutense University of Madrid, presented a paper entitled: "Teachers with their feet on the ground", during which he also invited Salesian schools to bring the encyclical of Pope Francis Laudato Sì to class. "We must accompany this generation that will rebuild God's Creation," said the professor, referring to the students and young people who are waging an ecological battle.

Even the teachers who attended the courses subsequently took the floor. Marta Parrado, of the school of the Daughters of Mary Help of Christians in Aravaca, a student of Group III of the Course on the Management of Educational Centers, declared that "it is we who have the responsibility to accompany, help, delegate and leave when necessary," as Don Bosco did.

"Being Salesian makes us people without frontiers, capable of contributing with our best practices to making this world a better place," concluded Alberto Parra (Salesians San Pedro-Triana).

Finally, Ángel Astorgano, National Coordinator of the Salesian Schools, concluded the diploma awards ceremony with a short speech in which he invited teachers to continue their daily ongoing formation in order to train their students and offer quality education.

The Salesian schools have their origin in Don Bosco's mission with the young people of Turin from the 19th century. From the very beginning, his concern was the education and integral promotion of young people as "good Christians and upright citizens". Today, the Salesian schools are a large, broad and rich reality, with 141 schools only in Spain, all of which aim to be faithful to the Salesian mission and educational style.