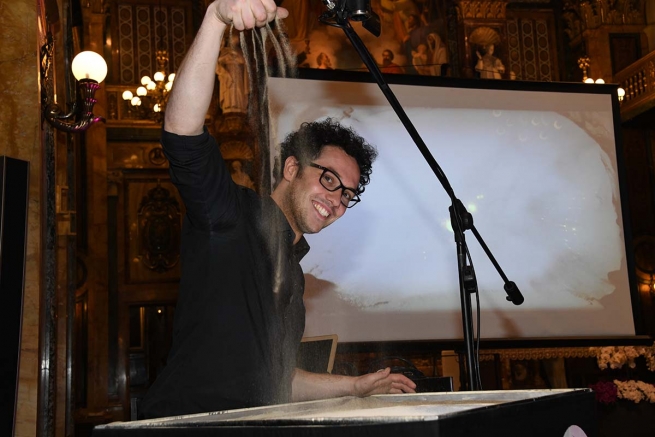 (ANS - Turin) - The artist Andrea de Simone was presented during the Triduum prayer vigil to Don Bosco in the Basilica of Mary Help of Christians in Valdocco on Wednesday, 29 January. Before the gaze of hundreds of people and with his "sand art", the artist depicted the affectionate face of Don Bosco as seen by an artist who met the Saint of Youth in his preparation of the artistic exhibition. The presentation only needed two things: passion for art and a little sand.

You sent a beautiful message through your art. How did this form of artistic communication come about?

I am an "artist with sand". Since I was a child I've liked this type of art. When I was in the oratory my friends played and had fun playing ball, but I didn't like fooftball; so while they were playing football I began to draw on the sand and with my fingers I traced works that I'd started to like and becoming part of what I am today: an "artist with sand".

Andrea, what is it that unites you to the Salesians?

It's not that I had a very intense relationship with the Salesians or with Don Bosco, but I was lucky enough to get to know him little by little. A young Salesian invited me to create a work of art with sand and to do it in this Shrine. And thanks to this Salesian I was able to make this show live in the Basilica of Mary Help of Christians.

And what did you learn about Don Bosco?

Don Bosco is a great saint. When I started studying in preparation for this event and got to know Don Bosco, I was surprised by his figure. A deeply inspirational saint. When you meet with the Saint of Youth, two attitudes arise in a person, in me personally: you either love him or hate him. With Don Bosco there is no other option. But Don Bosco cannot be hated, because he knows how to inspire you, gives you hope and trust, and his work with young people has been great. Especially work with young people in prisons.

What message did you want to communicate at the feast of Don Bosco?
I wanted to show Don Bosco as a saint who loves young people, who gives them trust, faith and friendship. He is a saint who believes in young people ... I believe that giving trust to a kid means offering him one of the greatest values. And the second message is the proposal that Don Bosco himself made and still makes to youngsters: to have the capacity to live with joy.