India - Fr Basañes: "Fighting the globalization of indifference with service" 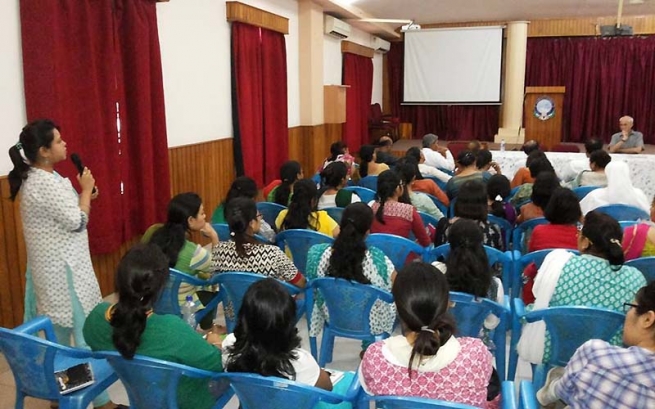 (ANS - Guwahati) – On 10 May last, the Councillor General for the Salesian Missions, Fr Guillermo Basañes, spoke to the teachers of the Azara Campus of Assam Don Bosco University (ADBU). His theme was "Fighting the globalization of indifference with service”. Fr Basañes is currently doing the Extraordinary Visitation to 28 works of the Province of Guwahati in the states of Assam and Meghalaya.

As part of the Extraordinary Visitation on behalf of the Rector Major which started on 19 February, Fr. Basañes devoted four days (9-12 May) to getting to know the situation of ADBU. On 10 May he addressed the teachers of the courses of Technology, Humanities and Social Sciences and Biological Sciences, and congratulated them on their commitment to the education of the students.  He also challenged them with a question: "what creative contribution have you given in the past five years?"

During his speech Don Basañes said that "young people are the great creative resource of the present, not the future" and, recalling the motto adopted for the current academic year - "Do not be afraid to fly" - he added: "Do not be afraid of flying in order to serve."

He went on to say that students should be encouraged to fly high so that they can better serve and so, using an expression dear to Pope Francis, fight the "increasing globalization of indifference".

Also the younger generation should be helped to be socially engaged and creative. He therefore proposed another point of analysis to the teachers: "are you developing the young generation, entrusting them with the responsibility to serve?" Finally, he also stressed that "the diversity of young people and their unity is our strength."