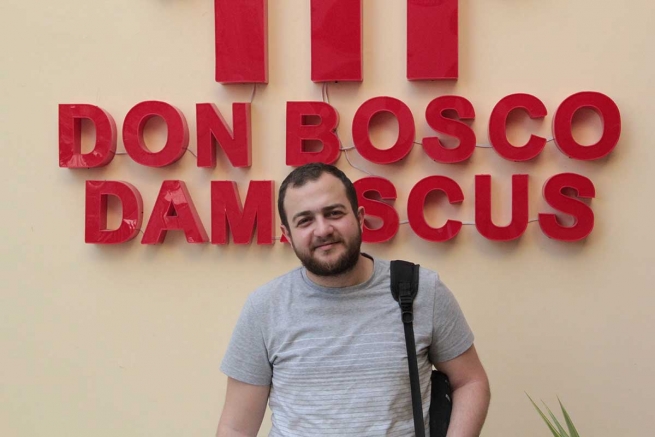 (ANS - Aleppo) - Syria is entering its ninth year of war this month, a war that has changed the lives of nearly 20 million people. The bombs no longer fall on the main cities and there are not as many people on the run as before, but one certainly cannot say there is peace and reconstruction has only just begun. The economic interests of the major powers have turned the country into a powder keg and into a crusade against jihadist terrorism, with more than 500,000 dead, more than 1.5 million injured and over 5 million refugees.

During all this time the Salesians have remained in Aleppo, Damascus and Kafroun, standing alongside the local population and especially the young people and their families through their works.

Maher Al Saloom is an example of what thousands of young people from Salesian circles in Syria have experienced. He is 24 years old and lives in Damascus. He is the second of three brothers. He was supposed to do military service, but a heart problem had him exonerated.

His life changed on April 17, 2013. “I was getting ready for the final high school exam, which was a few days away, and my father said I wouldn't pass it. At seven in the morning I was going over Physics when the phone rang. They told me that my father had had an accident, but when I arrived at my uncles' house I knew the truth, that he was dead,” recalls Maher, saddened.

That day he did not have the strength to return home and went, instead, to the Salesian Youth Center: “When I entered the church all the Salesians were there and, from that moment on, I found another father in them, because they have always helped me to continue to study and overcome the difficulties that have arisen.”

After the burial of his father, Maher continued to study, to make a gift to his father. So on examination “I even obtained a good mark, even if the difficulties at home arrived all the same, because we no longer had an income. It was then that the internal war began for me, which is stronger than the bomb war. There was a fee to pay for the funeral, for the university ... The Salesians helped us a lot, to us as to many other families. All that I am, I owe to them.”

The most difficult episode of his testimony was when they handed him the bullet that killed his father. Looking at it in his hand, he turned to a Salesian and left him speechless: “This bullet costs 15 Lire (3 euro cents); I'll give you all the money you want if you give me back my father alive.” From that moment on, Maher has never stopped studying.

“The youth center is my home,” he concludes. “It gave me everything when I lost what I wanted most; it helped me overcome the difficulties.”