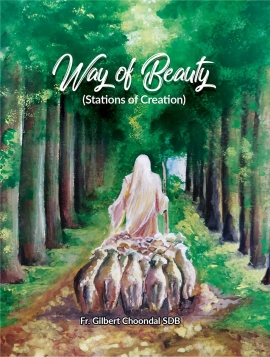 Fr. Gilbert Choondal SDB has gifted the Church yet with another series of the Stations, Stations of Creation, a reflective, prayerful, and practical devotional expression to bring to life the teachings of Pope Francis in Laudato Si’.

The fourteen Stations of Creation, following the pattern of the Stations of the cross, are considerations on creation taken from the Old and New Testament with appropriate biblical passages followed by suitable texts from Laudato Si’. “The entire Stations of Creation is a journey from the beginning of Creation (Genesis) till the end of our World (Revelation). It is basically a journey with the Word of God in the history of Salvation” says Fr. Gilbert.

The Vatican Dicastery for Promoting Integral Human Development has appreciated the Stations of Creation as part of popular devotion for the people of God and has encouraged the use of it in this anniversary year of Laudato Si.’ “We intend to shift this resource on Way of Beauty to the Laudato Si' Year website of the Dicastery at the close of the Season of Creation” says Fr. Joshtrom SDB, the coordinator for Laudato Si’ Year from the Dicastery. Presently, the text of this Way of Beauty is posted on the official website of Season of Creation.

Appropriate pictorial representation of each Station, along with a server carrying the Cross with white cloth on it (symbols of His Paschal Mystery), servers carrying soil and a plant on either side of the Cross (symbols of life and death in creation), and for each station an introduction, Word of God, reflection, a short text from Laudato Si’, give the participants a sense of being immersed in the mystery of Creation. Finally, it ends with sequences from the Canticle of Creation, the prayer of St. Francis of Assisi.

This popular devotion proclaims very powerfully one singular theme repeatedly mentioned in Laudato Si’. “Everything is connected” – God, Nature and Humanity. “One cannot separate ecology from economics, or economics from ethics, or ethics from politics” reflects Fr. Gilbert. This interconnectivity of everything and everyone in creation cannot and must not allow “the careless habits of mind and heart that allow us to pollute and waste also allow us to treat other human beings as disposable”. Stations of Creation is the prayer crying out to God for caring for creation.

A carefully reflected and prayed Stations of Creation leave one with a very humbling insight that the Creator has not abandoned His Creation even though man who was entrusted to care for it failed miserably. It leaves one with a refreshed hope of a new beginning. “Through all the twists and turns of the biblical story, God remains committed to his creation” reflects Fr. Gilbert. Finally, through the various moments of this popular devotion we can feel as if the Creation is looking up to its Creator for its final fulfilment. Thus, despite the horrible atrocities committed on earth, our only home, there is hope for humanity. The Stations of Creation try to fan that spark of hope into a flame.

The 14 stations include: God Creates our Home; God Creates Everything Good and Beautiful; God Entrusts the Earth, the Garden Planet, to the Care of Humanity; God Enters into an Eternal Covenant with Creation; God Introduces the Jubilee to respond to the Cry of the Poor and the Earth; The Creation Groans with Pain; The Heavens Proclaim the Glory of God; Creator Becomes the Creature; God Lives in Full Harmony with the Creation; God Commands the Powers of the Universe; God Teaches 'Human Ecology'; God sees the Interconnectivity; God Conquers Sin and Death; and Creation longs for the New Heaven and New Earth.

“[Way of Beauty] is beholding creation in the spirit of kinship with all that exists and cry out in praise and gratitude as the ‘poverello of Assisi’ did. It is seeing the natural world with the eyes of wonder and joy as children do. It is perceiving the wounds of creation with pain and empathy as so many committed eco-apostles do around the world,” says Archbishop Thomas D’Souza of Calcutta.

The full text of the Stations of Creation - a Way of Beauty is posted on the Website of Season of Creation and is available here.