What’s our story? A Handbook for all who works in the Catholic Media
Featured 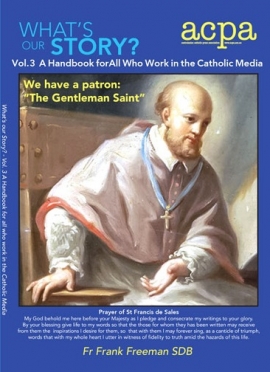 This is a spiritual handbook, aimed at providing guidance and spiritual nourishment for all those who find the Catholic media to be their vocation. The handbook, which features the patron saint of Journalists, St Francis De Sales on the front cover, seeks to explain to everyone who works in the Catholic media the dignity of their vocation and their own special spirituality. It helps share some of the background of the patrons of Catholic Media and includes suitable prayers relevant to this profession and gives a special emphasis to the patron saint of publishers & editors, Don Bosco.

Another key inclusion is the chapter wherein words of encouragement from several authors who have had rich journalistic careers working as members of the Catholic Media, as well as explaining their passion for their vocation. These authors are from around the Australasian region and feature a piece written by Fr Frank Freeman SDB, the author, as well as Fr Ambrose Pereira SDB, a prolific writer and avid formator of Salesian Media projects from the Papua New Guinea & Solomon Islands province.

Fr Frank Freeman SDB, Editor of the Australian Salesian Bulletin, has spent the past 15 years investigating the extensive history of the Catholic media in the Australasian region. Here he shares: “Some years ago, I was a part of an animated conversation as to the role and vocation of a Catholic writer and journalist. One opinion was that it was simply a job, to pay off the mortgage and the kids’ school fees.”

“Taken aback, most participants of the conversation grew quiet. That was until one much more experienced journalist explained how much he had grown since transferring from the secular media to a religious publication. He spoke about them as growth years; the Catholic Media had been a great boon to their confidence in their own spiritual, cultural, and personal identities – and it was this conversation that gave birth to the idea of a formative handbook for the Catholic Media”.

It is hoped that the great spirituality and formative guidance offered in this book will be of value to all those who work in the Catholic Media.

For further information and to place orders for books, please contact: https://www.salesians.org.au/contact-us/makecontact