‘In whom there is no Guile’
Featured 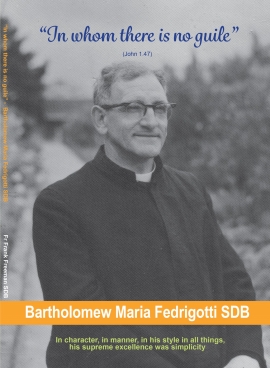 To honour the 60th anniversary of the foundation of the Australian-Pacific Province, the life of Fr Bartholomew Maria Fedrigotti, the first provincial, has been published. The author, Fr Frank Freeman, has been editor of the Australian Salesian Bulletin for many years.

Bartholomew Maria Fedrigotti, a loyal Church Man who loved the church, its teaching and its liturgies; a totally committed Salesian Religious; an avid Scholar steeped in classical literature; a Scientist with an innate curiosity and wonderment of all creation, all were harmonised in his prayerful well-balanced personality which was marked by these outstanding characteristics:

His Presence: He was regularly present with the students in recreations with something to attract their interest.

His Equanimity: He seemed to always live in a sea of calmness...” Enough for the day is the evil thereof.” “There’s a God in Israel”. “The Lord will provide.” were some of his favourite sayings

Friendliness: He loved meeting people and showed it by enjoying simple events and games.

A Sense of Justice and Fairness: His sensitivity and continual appreciation of helpers, especially lay people were always in evidence as was his gratitude and compassion.

Such was this man who tested by the fire of hardship and difficulties, became truly a humble rock of stability in the long difficult years of the early Salesian presence in Australia. Such was the man who became our first Provincial Superior of the Australian Province. May his life’s witness enhance and live long in the Province’s memory to guide those who now steer the Province’s ship into unchartered waters.