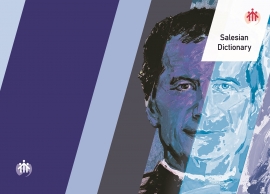 This dictionary has been published under the auspices of the East Asia-Oceania Region. It has been compiled over a long period of time covering two Workshops held by translators from the East Asia-Oceania Salesian region, one in 2014 the other in 2019. The Salesian Dictionary is a comprehensive effort to compile a list of terms in current (and sometimes in historical) use in Salesian discourse in English. Perhaps 98% of these terms have originated in Italian, some in the Piedmontese dialect, the vernacular of the founding Father and most of his first followers. But as Don Bosco’s charism became established outside of Italy, it was inevitable that new terms would arise with their origins in other languages.

This dictionary, which has developed over many years of careful lexical observation and annotation, is chiefly interested in meanings and usage relating to Salesian discourse in English, and includes terms that have entered that discourse from English and, indeed, other languages. The dictionary (it is far more than a glossary and more like a compendium) contains a great deal of information. Not only are some terms complicated, containing several meanings, but due to their consistent use in Salesian discourse, may have developed a history of their own and require some explanation. The compilation of terms has borne in mind both the translator and the seeker of knowledge regarding the Salesian charism of St John Bosco.

The East Asia-Oceania region has brought translators from the Salesian Family together on two occasions so far (2014 in K’Long, Vietnam, and 2019 in Anisakan, Myanmar). These workshops have insisted on the value of producing glossaries in the various word pairs that translators in the region are working with. And since English is the ‘lingua franca’ of the region, it was seen to be an essential first step to produce what would effectively be at least a bilingual glossary in the Italian-English language pair, but one not ultimately restricted to that pair should some terms originating from other languages in the region also need to be included.

Where there is more than one word or phrase given as meanings, the first of them is the primary sense of the term in normal Salesian discourse, followed by synonyms that may be appropriate in context. A simple indication of part of speech then follows in italics. If the headword consists of more than one word, the part of speech may be either a ‘phrase’ (Noun, Verb, etc.) or an ‘idiom’ or set phrase. Information regarding the term follows. In some instances, the entry concludes with usage or linguistic notes marked separately, indicating a cross-reference.

The digital copy is available for downolad on the Boscolink