FALLING STARS FORCE US TO LOOK AT THE SKY
Featured 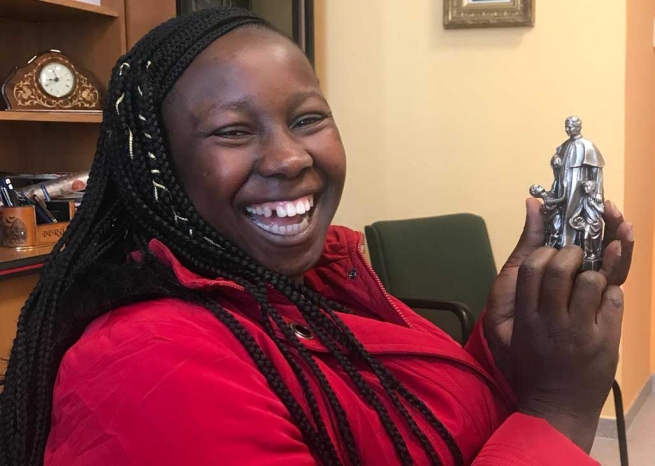 We would spend hours, as children, with eyes that searched the dark sky to catch and surprise falling stars. They said to us, "When you see a falling star, make a wish." But it is always sad to see a star that detaches itself from the sky and falls. Where do falling stars go?

Augusta is one of them stars. She was a nine-year-old girl and prostituted herself on the streets of Freetown, the capital of Sierra Leone (West Africa), but at nineteen she was a young woman who, head held high, presented herself to the European Commission for the Protection of the Child in Brussels and acted to ensure that the government of Sierra Leone officially acknowledge the existence of child exploitation and penalized it.

Everything happened because one evening Augusta went with a friend to the Salesian Van for a coffee. Rvery evening, the Salesians park their van on the outskirts of Freetown in an area where boys and girls who sell themselves to survive usually meet and gather. The Salesians offer them something to eat, find out if they need medical assistance and, when necessary, get them legal help.

After meeting the Salesians, Augusta decided to make a radical change in her life: she decided to leave the streets, leave her friends, give up the only way she knew to earn money. Thus began a process of social reintegration: she resumed studying and began, with the help of professionals, to heal the deep psychic and spiritual wounds that marked her soul.

This young woman does not have a media profile, she does not look like a star and she is not an influencer in social networks: she is a young woman with a bright and open smile who, behind the appearance of a normal girl, hides a heroine of our time who, thanks the courageous decision to tell her story and denounce the violation of her rights, was the driving force behind reforms that have saved thousands of other children abused by adults and of victims of trafficking in the sex trade. She is not capable of brilliant speeches or grandiloquent signs: she speaks simply, but her words touch the hearts of her listeners.

Augusta came to Rome to visit the Pope, met the Salesian Rector Major, Fr Ángel Fernández Artime, who gave her a statuette of Don Bosco. To him, she confided her dream: to open a small restaurant in Freetown and put the statue of Don Bosco inside.

Because already in 2017, together with other girls who had left the street, she ran a small home catering business.

Last June 6, due to Covid-19, the AIDS which had marked her as a child on the streets of the city defeated her at the age of 23. Leaving in all of us the bitter taste of defeat and the feeling of unfinished work.

The Augusta star has fallen and, according to tradition, I too make a wish, which I share with you. I would like many brave and authentic girls like Augusta to be born, to remind us that it is possible to break the chains that imprison society's most dispossessed, and that we can wipe out unjust laws and fight for justice in our daily lives, with the only assurance that God fights alongside us.

Because we know where the falling stars, like Augusta, go.

Into the welcoming hands of God.

I invite you to learn about the life of this young woman and others like her presented in a documentary of "Misiones Salesianas".

In the video settings you can choose subtitles in: Italian, English, French, Spanish and German.