What plot, Lord, are you weaving?
Featured 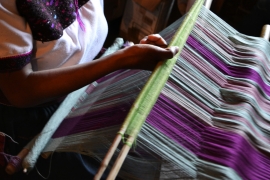 On a day of protests and clashes in Venezuela, two young people were assassinated. Carlos José Moreno Barón was killed while on his way to a football pitch.  He did not reach his destination. Paola Ramírez Gómez, 23, was killed while returning from a job interview as she was passing in front of San Carlos Square in San Cristóbal. Neither of them was participating in the protests.

Both of them were from a Salesian background, two young students of our schools in Venezuela.

And I say to myself ... "God of questions, God who sets us free,

God of exiles, God of Easter, God of the deserts;

God who challenges, God who cannot be explained,

How difficult it is for me to see

When, one thread after another, I fail to see the meaning "*.

And I reflect on another aspect of the world we live in - the young people from our works who commit their lives to helping the needy.

For example, we look at Argentina, where two regions have been affected by bad weather, Tucumán, in the North, and Comodoro Rivadavia in the South.  In both cities, young people from our works have gone to help the needy. They did not wait for others to do something. They themselves formed teams to distribute food or to help families recover their belongings from flooded homes, or clean up mud and debris from the roads.

These two realities are just a part of the great network of Salesian life in the world, two different colours that add to the threads that intertwine and form in our hearts the daily experience of being the fathers of these young people in thousands of Salesian houses and environments. We are happy for their joys, and we stand in solidarity with them in their sufferings.

On the one hand, I do not understand the death of these two young Venezuelans, the result of senseless violence. I only know that it is an appeal to us for a radical commitment to the defence and care of those whom God has entrusted to us, and each of these losses affects us profoundly.

On the other hand, there are signs of life that give us hope for a better future and a more just world. They are reinforced by these gestures of solidarity and the sacrifice of so many young heroes who respond with concrete solutions as far as possible to the pain and to the difficulties of the people.

"Lord, your ways are strange, but so perfect.

This eternal habit of your mysterious paths,