It doesn't matter where we are, but let's not lose joy and "let's get loud!"
Featured 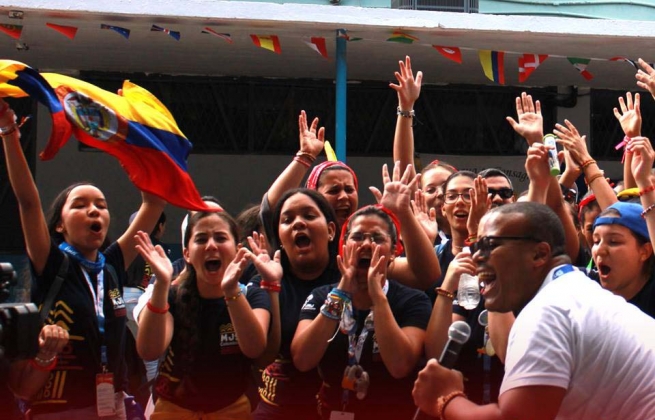 Young people lying in their bed, with their headphones on, staring at the phone, waiting for the day to pass and the next one to arrive. This is the image of millions of kids every Sunday afternoon. It is the reality that a great number of young people live today, in a situation of existential emptiness, as underlined by the Austrian psychiatrist Victor Frankl, referring to an existence without values. It is an evil that grows in our societies like an epidemic.

This situation of emptiness and immobility is opposed by the enormous enthusiasm for life radiated by the hundreds of thousands of young people who have gathered in Panama City these days, a crowd that believes in hope and is convinced that it is indeed possible to build a better world.

Being young today is a great challenge that requires more than ever the strength and courage to go against the grain, against the current, in a society that has insisted on killing dreams, eclipsing values and reducing everything to an artificial happiness that is in the space of a wallet.

It is moving to see the disinterested unselfish solidarity of many young volunteers in Panama who for months and months have generously dedicated their time to prepare places and resources to welcome other young people and make this meeting a moment of authentic faith, joy and friendship. Such days mean touching the possibility of a utopia.

It contrasts with the crude analysis of the Korean philosopher Byung Chul-Han, who denounces how in our society "performance" has established itself as a philosophy of life, composed of a system of rules and forms that people must accept just to survive. A society based on the mythization of the best, identified as and with the most competitive, where the subjects are forced to exploit themselves and to live constantly with the fear of being discarded. It is that kind of society that, according to Goleman, generates real "emotional illiterates", ie people unable to manage their own emotions.

The cultural context in which young people are called to build a new culture, the fruit of their dreams and their hopes, is not at all easy; and yet, they themselves are still the best ones to do so, because they have within themselves the seeds of courage and passion for interpersonal encounters and the creation of authentic human ties.

The courageous witness of faith of the youth of World Youth Day 2019 is impressive. It is a clear message to the Christian communities worldwide, a call not to be discouraged and to follow their example. It is time to inspire hope together in a society trapped in its passion for technology, innovation and performance, but disrupted, disenchanted and without objectives.

In the network, many celebrate the triumph of the so-called new references of life and the end of institutions, but the young are showing that, while desiring a profound change of structures, they have not abandoned their search for values, nor the call to faith as a personal base or foundation and for the transformation of the world.

"Do not forget to always be happy, make a lot of noise, and do not let yourselves be discouraged," we say, paraphrasing Don Bosco and Pope Francis. An invitation suitable for all of us who believe.