It's not a coincidence ... it's synchronicity!
Featured 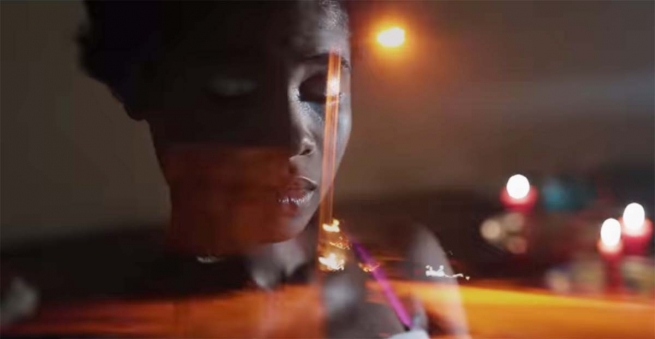 Augusta is a 20-year-old girl and when she smiles her face lights up, with a gaze that is frank and full of life. Nobody could imagine that she is a survivor of the streets of Freetown, Sierra Leone. This young woman could very well call herself a "warrior" on her Facebook profile and she would not be lying.

Augusta is an orphan. She has lived on the streets since she was 6 years old and was forced into prostitution to survive; she was with every kind of man to the age of 16 when she was saved by the Salesians of "Don Bosco Fambul". A girl who appeared only in the health records of the city, once in the Salesian house returned to pronounce her name, her real name, the one that was not to be pronounced on the city streets. Now she is 20 years old and has fulfilled her dream by meeting the Pope in Rome. She briefly told the Holy Father her story. The Pope was moved. He blessed her and, with her, blessed the many girls who have lived and live similar experiences of misery and exploitation.

Augusta is the protagonist of a chain of "coincidences".

It's difficult for Fr Crisafulli not to be moved when he talks about the boys and girls he has saved from the streets of Freetown, and even more when he thinks of those he has lost. Together with other Salesians, he leaves early in the morning to visit the places where these sexually exploited girls, aged between 6 and 14, usually take shelter, and brings them hot food, medicines and - above all - the proposal of a safe house far from that inferno.

This group of Salesians is the second actor in this chain.

From Spain, a group of committed professionals tries to make the reality of child exploitation visible to the eyes of the world. From Madrid, its members go to Freetown to walk the streets, together with the Salesians, in search of evidence of this human drama in such a way that silence is not an accomplice of this reality.

They are the third actors.

A "warrior" girl, a group of religious and media meet in what to many would seem to be just a coincidence.

The testimony of the girl, the vocation of the Salesians and the professional capacity of a means of communication, united together in making visible a reality hitherto denied by the government of Sierra Leone, have managed to gain access and to deeply influence the international forums and the government sphere, producing a change even in the laws that punish child trafficking.

"Coincidences" of this kind are unimaginable, almost magical, improbable in real life; it is as if there were connections between events, people or information through invisible threads that we can only glimpse for a few moments.

According to the Swiss psychiatrist Carl Jung, this is not a coincidence, but a synchronicity, one of the most enigmatic and surprising aspects of our universe. Jung came to the conclusion that there is an intimate connection between the individual and his environment, which at times exerts an attraction that ends up creating those particular or special circumstances we call "coincidences". Perhaps this is one of the many universal laws that cannot be tested with too much certainty, but that has nevertheless regulated the life of a multitude of people and is present throughout the history of humanity. According to the faith and tradition inherited from Don Bosco, we call it "Providence".

And if we know how to listen to Providence, it can become a good guide for our lives.