IT IS NOT A TRUE CELEBRATION
Featured 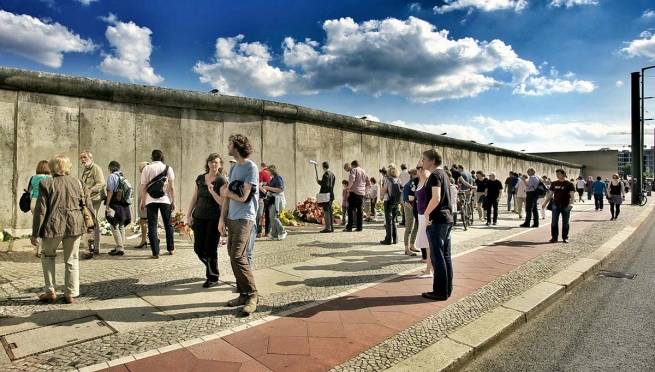 Thirty years ago a wall was destroyed that was the symbol of the separation between peoples, and we all celebrate. Today, however, the lesson has been forgotten and walls continue to be erected.

Thirty years after the fall of the wall of shame, we are still raising more important ones.

These days we commemorate the 30 years since the fall of the Berlin Wall, that day everyone was surprised to see that the so-called "wall of shame" was collapsing and from that fall many dreams and hopes for a better future were generated.

However, it seems that the thousands of pieces of wall scattered around the world, just 30 years later, were the seed of other walls that were built in the world: 77 walls already built and at least 45 countries are planning or building one. Since 2015, more than 800 kilometers of walls and barriers have been built only in Europe and Trump continues his efforts to build an increasingly impenetrable barrier between the United States and Mexico.

Thirty years ago a wall was destroyed that was the symbol of the separation of peoples, and we all celebrate. Today, however, the lesson has been forgotten and new walls continue to be erected that damage human coexistence and become visible symbols of separation, fear, selfishness, but above all of the false theory that a wall can give tranquility, separating and excluding the undesirables. A wall marginalizes those who are different from us, but unfortunately isolates us and ends up closing us in ourselves: in our ideas, in our truths and in our beliefs, impoverishing and blocking us.

The walls are built first in our heads and in our hearts. We give names and labels, we separate ourselves from all those who are "different", who think differently, who do not enter into our canons. Some justify them: it is necessary to build walls to protect us from those who try to rape and kill, from drug addicts and from many other dangers. Perhaps they are increasingly needed in an ungovernable world, but this measure is as logical as that of curing cancer with aspirin, not the analgesics but the real medicines that cure diseases, and the solution to social cancer produced by the exacerbation of the individualism and the cult of capitalism in all its forms needs another kind of longer term and more radical treatment. It needs a change of perspective and the possibility of recovering what essentially makes us human: dialogue, solidarity and cooperation as a way of life.

We Salesians are also called to this new logic.

The first thing is to break down the wall of pride and discomfort and get out of ourselves, accepting that as a Church we cannot present ourselves as pure and immaculate subjects, that God himself has already taken every mask from us and forced us to look in the mirror and see who we really are. He took the first step. Now we are offered the opportunity to rebuild bridges with our recipients, to leave our safe and comfortable spaces behind the walls and to go out into the street and begin with humility to walk with young people and listen to them to regain their trust, through new and creative service initiatives.

"Build bridges and not walls," the Pope said last year at WYD. It is the urgent invitation to fight to open spaces for dialogue, to eliminate suspicions and prejudices, to denounce unjust ones and to propose new and creative demands. It is time to start.