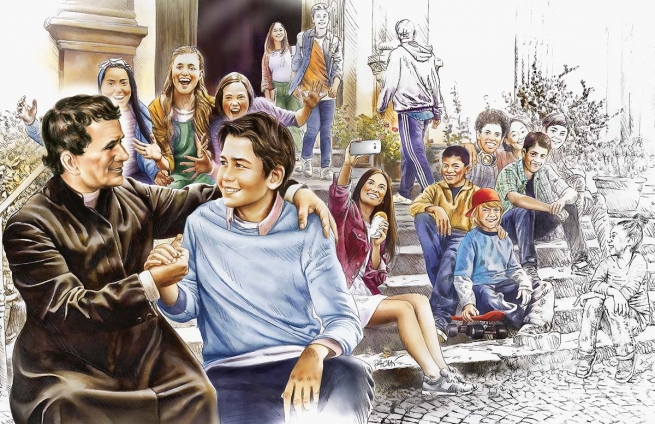 The Strenna of the Rector Major for next year invites all of us to confront ourselves with the ideal that we must reach with our young people in 2020 in a concrete way. In the current conditions, in the new social and cultural contexts, it is undoubtedly a complex task as it is the result of a delicate pedagogical relationship in which the young person is the protagonist of this process. A testimony of Don Bosco's life may enlighten us:

One Sunday, Carlo Buzzetti (one of Don Bosco's first boys) arrives at the Oratory accompanied by his younger brother. His name is Giuseppe and he has just arrived from Caronno Varesino, his small town. He was a pale boy, he was very scared.
- “Don Bosco, this is my brother Giuseppe. He's only ten years old.”
- “I'm your brother's friend, and I will be yours too,” says Don Bosco smiling. “Where will you work?”
- “With Carlo. But I'm afraid of the master,” the little one tells him.

Giuseppe became very fond of Don Bosco and was always close to him. That first afternoon, before leaving the Oratory, he told him:
- “Don Bosco, do not leave me alone. Come and see me.”

The next day Don Bosco went to the construction site to see him. The site manager asked Don Bosco, “What do you want?”
- “I'm in charge of the children of the Buzzetti family. I have to look after their children on Sunday and during the week. Giuseppe, the youngest, arrived yesterday. Where are they?”
Carlo and Giuseppe, who had heard Don Bosco's voice, called him.
- “We're here!”

Don Bosco climbs the scaffolding. And for those kids to see Don Bosco and to be able to talk to him at work is a moment of celebration.

Giuseppe complains:
- “The lime can is too heavy for me, and the day is long.”
- “Come with me. Let's go talk to the boss,” Don Bosco replies.

Don Bosco explains to the man - tough, but not a bad man - that he is willing to guarantee for the good conduct and commitment of those boys, but that the boss must proportion the fatigue to the age of the boys:

- “He's still a child! How can you put a cube of lime on his shoulders?”

Thus Don Bosco begins, with concrete gestures, to save the young people he visits in their workplaces. Someone showed him the need to learn to read and write, to know how to do basic math ... And so Don Bosco finds the right time or the right people to teach them.

Forming Good Christians and Upright Citizens is the result of profound and creative relationships where the young person is at the center of the relationship, as the educator Paulo Freire says: “Young people are educated through dialogue, empathy and authentic curiosity” - an intuition very close to the style of our founder.