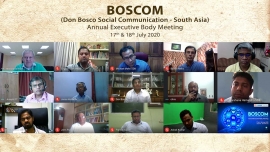 (ANS - Mumbai) - On 17 and 18 July, the annual meeting of the executive body of BOSCOM, the network of social communication networks of the Conference of the Salesian Provinces of South Asia, was held. The meeting, this year, was held through the Google Meet platform and was convened by the BOSCOM Delegate, Fr Ernest Rosario. The participants of the 11 Provinces of South Asia were accompanied, for the duration of the meeting, by Fr Gildásio Mendes dos Santos, General Councilor for Social Communication of the Salesian Congregation.

The executive body discussed, deliberated and debated the way forward after the pandemic, focusing on the theme: "How can we creatively accompany young people in the virtual world."

On July 17, after the initial formalities, the moment of prayer and the welcome, the agenda was dedicated above all to the presentation of Fr Gildásio Mendes dos Santos, who congratulated the BOSCOM organization for leading a presence of exemplary communication in the Salesian world. He invited the participants to focus on the new emerging realities and on the collaboration with the other communication networks of South Asia, to show and promote the good works created with and for the marginalized of the whole Region.

Much time was also dedicated to the intervention of Fr P. T. Joseph, who explained the transition to the new portal www.donboscosouthasia.org. Subsequently, Fr George Christopher, editor in chief of BIS (Bosco Information Service), updated the participants on the current situation and provided a roadmap for the future. Finally, Fr Michael Makri presented and moderated a discussion on the creative presence and accompaniment of young people in the virtual world.

The following day, Saturday 18 July, the BOSCOM logo was discussed. To choose the logo, a competition will be held, in which young people, Salesians and artists can participate.

Several discussions were then opened, specifically concerning the new domains of the web portal, the idea of ​​starting a research project at the national level on digital addictions, and the future of the "Don Bosco National Film Festival" and the possibility of creating an online film festival.

At the end of the meeting, Fr ​​Gildásio Mendes dos Santos congratulated the entire executive body for the intense work done over these two days. In greeting, the General Councilor for Social Communication stressed that he intends to participate in other meetings in order to listen to new creative proposals from BOSCOM.