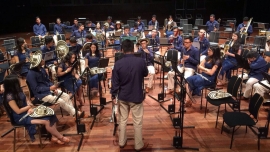 (ANS - Bogotá) - From July 12 to 28, the Symphonic Band of the "Niño Jesús" Salesian house in Bogotá is in Europe to take part in two world competitions and to perform several concerts. At both competitions, it has achieved great results.

The symphonic band consists of 65 children and teenagers aged between 10 and 20. The band's story began with the arrival of Fr Juan Martín Sierra in 1971; in 2000, the band opened its doors to the communities of the surrounding neighborhoods, and the house decided to increase its attention to musical activities. In 2008, the Maestro Miguel Ángel Barrero was hired, and the band re-launched in 2010 under the direction of Maestro Rogelio Arturo Castro García who started upon a new course for the formation of good Christians and honest citizens through music.

Now, during its European tour, the symphonic band first participated in the 131st Certamen International Contest for Musical Bands held at the “Palau de la Música” in Valencia, Spain. It competed with other bands from Germany, Spain, the United States and Colombia and scored 310.5 points, enough to win second place.

The second competition was the "World Music Contest" (WMC) which took place in Kerkrade, Netherlands, where the Salesian Symphonic band achieved the best score of the day it performed in, was first in a partial score, and received the "Timbal de Oro" prize, the award assigned to the band that best qualifies on the day it performs.

It also participated in the Harmony section, 3rd Division, and has so far competed with 20 bands from different countries. The competition ends on 30 July when the final results will be known; the Salesian Symphonic Band has achieved the highest score so far. With the concert in Kerkrade, its participation in international concerts concludes for the current year.

On the remaining days of its European tour, the symphonic band will perform concerts in several cities such as Madrid, Barcelona, Denia, Maasmechelen and Paris, where it shall present the art of Salesian music.