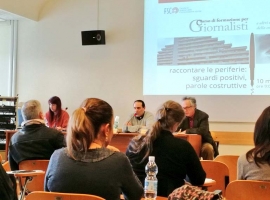 (ANS - Rome) - The banlieue, inner-city, or periphery as a space, as a dimension, the periphery, above all, as a lively and vital reality, and not simply a catalyst of social problems and degradation. Because "reality is better seen from the periphery," as Pope Francis said, who has brought the theme of the banlieues into the magisterium of the Church. From this point of view, on March 10th, at the Salesian Pontifical University in Rome, a formation course was held entitled: "Narrating the peripheries: positive observations, constructive words."

The first presentations tried to focus on the nature and features of the banlieues from urban and social aspects; more specifically, prof. Fabio Pasqualetti, SDB, UPS professor, illustrated how in the current socio-economic system the condition of periphery and marginality of large sections of the population is a pre-condition to strengthening the position of those in the center, or the mainstream.

The journalist Michele Partipilo, editor-in-chief of the “Gazzetta del Mezzogiorno”,  an Italian daily, discussed the deontological elements that must guide information and media professionals in dealing with so-called "weak subjects."

The talks by prof. Giuliano Vettorato, SDB, also from UPS, and Fr Camillo Ripamonti, President of the Centro Astalli (Jesuit Refugee Service), also analyzed the mechanisms of the genesis of these areas and the real ghettos - physical and social - in modern societies. Genesis which in their public representation by the media as well as by ordinary people is not foreign.

For this reason, in the afternoon there was a strong summons to consider not only the real situations of hardship and degradation - effectively present, but also a relative minority – but also, and especially, the cultural liveliness and the capacity for resistance of the silent majority living in these same areas.

Interesting in this sense was the analysis proposed by a research group of the same FSC - coordinated by Fr Renato Butera, SDB, also the meeting's moderator - on how the banlieues can be narrated and represented in a very different fashion through deliberate dramatizations or, vice versa, leaving their description to those who actually live there.

Finally, Fr Giovanni d'Andrea, President of "Salesians for Social", narrated how in his years spent in a Salesian center on the outskirts of Palermo, he met many people committed to building a better neighborhood, people who worked on the basis of a simple motto: "Whoever wants to do something great, finds the way; those who don't, find excuses."