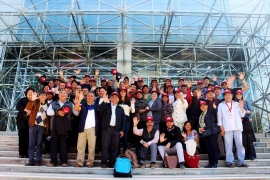 (ANS - Cochabamba) - Under the guidance of the German Salesian NGO "Don Bosco Mondo" (DBM), based in Bonn, a process of empowering skills involving 20 American Provinces, both of the Salesians and of the Daughters of Mary Help of Christians, has begun.

The so-called "Start-up Laboratory", held from May 21 to 25 in the city of Cochabamba, Bolivia, was attended by 58 people, including managers and functionaries, religious and lay, of the Planning and Development Offices (PDO) and of Vocational Training Centers (VTC) in Latin America.

The purpose of this "Start-up Laboratory" was to set up a joint formation process for the PDO and VTC teams. It addressed, at the PDO level, the need to improve strategic planning and quality management was identified, strengthening project management and political impact in the region, and working on transversal gender lines, plus issues of the environment and Salesianity.

With regard to vocational training, the formation itineraries include a skills-based approach, quality management and accompaniment in the work placement phase of graduates.

The event was also able to count on a mutual listening phase, so the different leaders and Provinces would get better acquainted and also learn about previous appointments and orientations - such as the world meetings of the PDOs held over the years in Rome, Hyderabad and recently in Nairobi. Subsequently outlined, through work progress and group discussions, were the phases to be made and the challenges to be faced.

Furthermore, shared among the participants was the recommendation that the Rector Major, Fr Ángel Fernández Artime, consigned to the Provinces to participate in this very process.

This first meeting has opened paths of solidarity and mutual learning among the groups who have just started upon a common path, and has reinforced the existing paths established between several institutions.

The next formation meeting will take place from September 21 to 25, 2019, in Cochabamba, Bolivia.