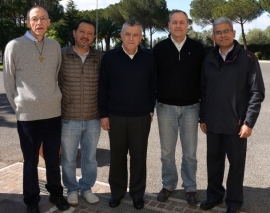 (ANS - Rome) - On December 22, the Council of Presidency of the Salesian Biblical Association (ABS) gathered at the Salesian Headquarters of the "Sacred Heart" in Rome. The purpose of the meeting was to reflect on the work done in the last two years and on the possible options to make communication between the ABS Councilors and with the Salesian biblicists across the world more fluid and effective.

During the working day the date of the next ABS World Congress (August 2021) was also set, and with it the themes: in addition to being current, the main theme should reflect on the path taken by the ABS in the Congregation since its foundation, and to plan more clearly what it could offer to the formation of Salesians and as a reflection for youth ministry.

During the meeting, the office of Secretary was also renewed. In this way, Fr Francisco E. Zulaica, proposed by the Presidency and approved by the Council, replaces Fr Corrado Pastore, who has served this service for many years.

Among other topics, information was provided on the outcome of the Educational Experience in the Holy Land, celebrated in August 2018, an initiative of the Dicastery of Formation carried out by three biblical scholars, members of the Council of Presidency. Given the positive reaction of the participants, this experience will be repeated from 11 to 23 August 2019, for Spanish-speaking Salesians.

The ABS also continued to accompany the journey and reflection of the Congregation with two volumes, published in Italian, English and Spanish: one, of Lectio Divina, on the themes of the Youth Synod; the other, of Biblical-Salesian reflections, on the theme of the next General Chapter, to be distributed among the Chapter members before the beginning of the Chapter.