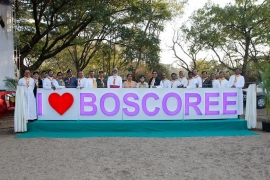 (ANS – Nashik) – The 13th National Boscoree, a gathering of the Don Bosco Scouts and Guides, is being held from 30 December 2018 to 03 January 2019 in Nashik. It is organized by the Salesians of Don Bosco, with 4815 participants, and it is themed “Health, Harmony and Holiness”. The great event began with great pomp and fanfare on Sunday, 30th December, with all the participant and dignitaries gathered on the “Father Sean McFerran Parade Ground”, Divyadaan Salesian College of Philosophy. Ms Ann Choi, Salesian collaborator and the Deputy District Commissioner of the Scout Association of Hong Kong was the Chief Guest for the occasion.

Scouts and guides from Maharashtra, Gujarat, Uttar Pradesh, Madhya Pradesh, Bihar, Kerala, Tamil Nadu, West Bengal, Assam, Punjab, etc., including those from Andaman and Nicobar Islands, Pondicherry and Nepal are participating in the event. A massive total of 141 units from 22 states and 2 Union territories from the Salesian and FMA institutions belonging to the 12 provinces of India will experience living in 200 tents spread over 16 sub-camps.

The theme of this BOSCOREE 2018 focuses on the impression that the scouts and guides leave on the society and environment around them. The BOSCOREE Programme Committee has set out five objectives for the 13th National Boscoree: To promote a healthy lifestyle, to build harmonious bridges with people and environment, to become noble and holy souls, to radiate the Salesian charism of Don Bosco and St. Mary Mazzarello, and most importantly to give the scouting movement greater visibility across India. The entire BOSCOREE is an opportune moment to educate the youngsters about the 'Great Commandment of Love'''. The Three Loves- Love of God, Love of Neighbour and Love of Self-resonates well in the 3-H formula: HEALTH-HARMONY-HOLINESS.''

In the pre-camp preparatory days on 27 and 28 December, the Boscoree organisers assessed the preparation made thus far, focusing on sorting of souvenirs, camp book, staves and the Teenager magazines into sub camps.

In the inaugural ceremony, the scouts and guides from Dakor, Ahmednagar and Kawant enthralled the gathering with their spirited enthusiasm swaying to the beats of the dhol, the lezim and the cymbals. The Salesian students of Divyadaan Salesian College of Philosophy enhanced the ceremonial extravaganza with their polished band pieces.  Percussionists from Sacred Heart School, Nashik, provided the local flavour with the feisty rhythmic Nashik Dhol.

Further on, the ceremony struck a solemn note as the dignitaries were escorted by the colour party to the stage at the call of the bugle. This was followed by the flag break, the national anthem and the scout prayer song. Immediately thereafter, 17 groups representing the scouts and guides from the different Don Bosco and Auxilium schools participated in a highly disciplined march to the beats of 'Colonel Boogey'.

A serene and synchronised prayer dance by the students of Kilbil School, Nashilk, was then followed by Father Ian Doulton, the Boscoree Camp Chief welcoming the gathering and encouraging the scouts to be strong and self-reliant. ''Scouting is a way of life that reminds you that today you are a young citizen of this great country but before long you will be a full-fledged adult citizen of India.'' said Father Doulton.

The Boscoree Souvenir was released by Ms Choi, amidst a host of Salesian and other dignitaries. Sister Rita Dora, the Provincial of the Daughters of Mary Help of Christians of the Mumbai Province; Father Godfrey D'souza, Salesian Provincial of Mumbai; Father Robert Simon, the Don Bosco Youth Association Delegate for South Asia; Bishop Lourdes Daniel of the Diocese of Nashik; Dr. Ravindra Singhal, Commissioner of Police, Nashik City; and Ms Ann Choi. ''We need you to be ambassadors for Scouting,'' said Choi as she encouraged the scouts to continue the scouting legacy of instilling leadership, character and service and declared the 13th National Boscoree open.

The highlight of the event was the unveiling of the 'I Love Boscoree' selfie point by the Chief Guest. The installation is sure to be a fascinating crowd magnet over the next few days.

The inaugural ceremony concluded with a performance of the theme song and the vote of thanks by the Camp Chief.

The Official BOSCOREE LINKS are: