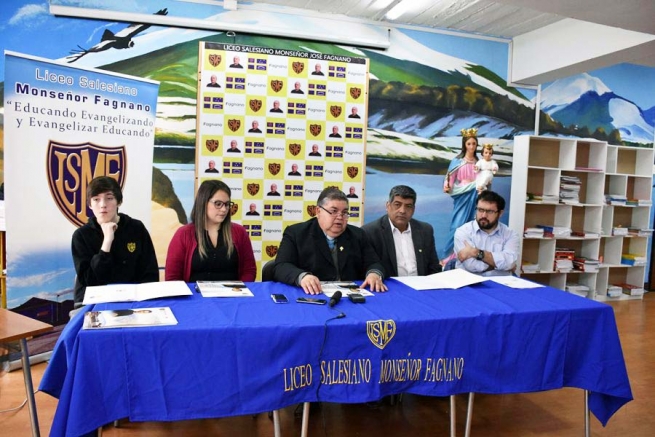 (ANS - Puerto Natales) - The official launch of the activities related to the centenary of the Salesian high school "Monseñor Fagnano" in Puerto Natales took place in the school library on the morning of 19 March. The activity coordinator, María Vásquez, announced that on March 22 there would be the inauguration ceremony of the centenary activities at the city's Sports Center.The activities to celebrate this centenary will be many and different throughout the year.

On April 1, in the high school, a special Salesian "good morning" will be offered on the institution's founding act. A new edition of the "Campo Bosco" will be held on 6 April.

In May, the high school will participate in the anniversary of Puerto Natales. On June 6, there will be the appointment of "Cuentacuentos", an educational event for children.

In July, the 3rd Family Festival will be held, in addition to the Salesian camps of Villa Feliz, a special edition of the centenary.

The Salesian week will take place from 12 to 16 August. On 13 September, the Salesians will participate in the parade of national holidays and organize an evening of "cuecatón" (typical Chilean dance), which aims to bring together 100 pairs of traditional dancers.

On October 17, the meeting of the 22 Directors of the country's Salesian schools will be held in Puerto Natales, and on this occasion the song in honor of the centenary will be presented. The following day the Eucharist will be celebrated and a Salesian parade will also take place with delegations of Salesian students from Punta Arenas, the band of past pupils and the band of the Don Bosco Institute.

On October 19, the anniversary gala dinner is scheduled. From Monday 28 to Thursday 31, there will be the Salesian Olympics "Centenary of the Salesian High School Monseñor Fagnano" with sports delegations from all over Chile. On October 30, there will be a procession to the cemetery to remember the Salesians who've passed away and served at the institute.

On the occasion of the launch of the activities, the logo and the official anthem of the centenary were also presented; it was created by the graphic designer and past pupil Andrés Díaz. The logo represents the mountain peaks of the Paine, accompanied by a cross, as a sign of evangelization and of the three fundamental pillars of the Salesian Preventive System. The hymn was prepared by Rodrigo Santana, a Salesian past pupil and professor at the Don Bosco Institute in Punta Arenas.